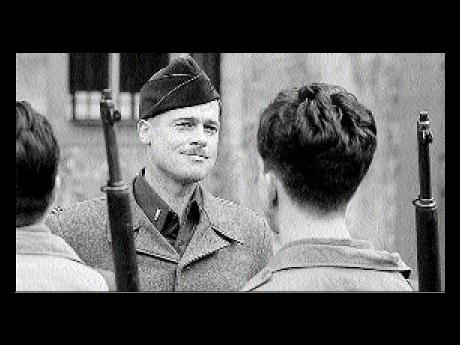 Film-makers have been writing the war itself into Oscar history almost since combat broke out. No other subject has resulted in more key Oscar contenders, with nearly three dozen World War II-themed films nominated for best picture, starting with Charles Chaplin's 1940 Nazi satire
The Great Dictator
.

Seven films with the war as a backdrop have won the top prize at the Oscars - roughly one in 10 of the best-picture winners since 1940.

The winners are bookended by two wartime romantic adventures, 1943's
Casablanca
and 1996's
The English Patient
.

Today's ceremony marks the first time since the heart of the war that 10 films, rather than the usual five, are competing for best picture. That last time came with the triumph of
Casablanca
, when two other World War II tales -
In Which We Serve
and
Watch on the Rhine
- also were among the 10 nominees.

Before
Inglourious Basterds
, the most recent best-picture contender set during the war was 2006's
Letters From Iwo Jima
.

While set years after the war,
The Reader
earned Kate Winslet the best-actress Oscar a year ago for her role as a former concentration camp guard on trial. Other acting winners for World War II-themed films include William Holden for 1953's
Stalag 17
, Frank Sinatra and Donna Reed for
From Here to Eternity
, George C. Scott for
Patton
, Juliette Binoche for
The English Patient
and Adrien Brody for
The Pianist
.

With eight Oscar nominations,
Inglourious Basterds
runs second to the sci-fi tale
Avatar
and
The Hurt Locker
, which have nine nominations each.

Avatar
and
The Hurt Locker
are considered the best-picture front-runners, but
Inglourious Basterds
seems certain to win at least one major prize. Dominating at earlier Hollywood honours, Christoph Waltz is heavily favoured to earn the supporting-actor Oscar for his 'Basterds' role as a chillingly amiable Nazi known as the Third Reich's ace, Jew hunter.