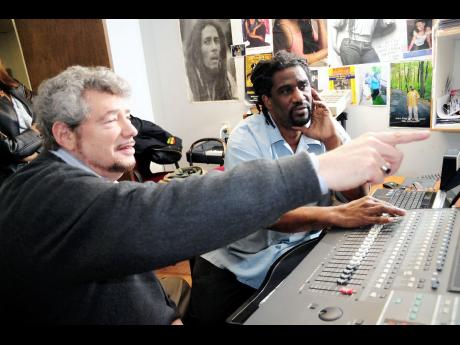 Jewish-American songwriter-producer Roger Meltzer is the chief executive officer of Capsicum Records. A lover of all musical genres, including reggae, he was in Jamaica as a sponsor of the recently concluded Excellence in Music and Entertainment (EME) Awards. Come May 28 to 30, he is inviting all the artistes who received awards at the EME, and who hold a valid United States visa, to participate in a benefit concert for Haiti at the Riverfront Plaza in New England over the Memorial Day weekend.

Why is he doing that? Meltzer respects reggae music and the work being done for it by the organisers of the EME. He also now has in circulation his first CD released under the Capsicum Record label,
Reggae-In-Fusion Album # 1
, and is in the process of distributing it worldwide.

Meltzer's real purpose for visiting Jamaica was to introduce the new "roots on the bottom, pop on the top" Hartford Reggae-In-Fusion sound to Jamaican radio audiences. He made the rounds to drop off copies of the CD while here. This sound, he hopes, will be as recognisable in the future as the Philadelphia sound grew to be.

The singers featured on the CD are a group of young, talented musicians who are descendants of Caribbean nationals residing in the United States of America. They are Burnie Terrell, Cuban Cohiba, Misteree, Sal Anthony, Sledge, Mayyah Stuart and Natasha Redding. What the listener will hear upon playing the album is reggae music interestingly fused with calypso, jazz, rhythm and blues, rock, pop, gospel and the blues.

Meltzer, in an interview with
The Sunday Gleaner
, said his love for music began early in life when he grew up hearing his parents listen to the classics and music from legendary Broadway theatrical productions. His taste segued to include Sam and Dave, Wilson Pickett, Jerry Butler, The Spinners, Otis Redding, Aretha Franklyn, Gladys Knight, Chakka Khan and Marvin Gaye, among others. So it was only natural that his path would lead to jobs in the music industry, where he fed from the vast experiences of such greats as McFadden and Whitehead and Kenneth Gamble, from whom he said he learnt in "writers' agony".

But nothing lasts forever. So in 1979, Meltzer started his own production company and in 2008 that led to the idea that since reggae mixes well with all other forms of music, that was the direction he should take.

It is not easy, as Meltzer feels that the overall image of the music has declined. Having first heard reggae icon Bob Marley in the '70s, he believes it is well past time for the music to hold its own among other genres in the industry. But there are some hurdles to cross.

"If the only music message you can give a woman is for her to 'skin out', listeners will get tired of it. You will just be turning out smut with a beat," he said. He was at pains to point out that other music forms are also guilty of unpalatable lyrics. "While I'm not crazy for dancehall, and feel that the lover's rock, roots rock foundation and rub-a-dub grooves are more soulful, some of today's dancehall stuff is quite clever (even if not especially musical)," he noted.

He said the new product he's co-producing with Joseph Everton 'Reality' Weekes reflects the quicker tempos of his calypso and soca background, but in fusion with his own background. Even their dancehall stuff is highly melodic.

"Actually the kick-drum patterns of dancehall are very much like those of soca; they're just not all connected with the snare and toms," he added.

On other matters in the industry, Meltzer is also very concerned that at the Grammy, reggae awards are still not presented onstage.

"Why not have a public stage presentation on the same night as the awards, as against a crawler at the bottom of the screen to say who won the category?" he said. And that is part of why he is sponsoring the EME. He believes the awards are a necessary and critical first step that is important to show the music is worthy of respect.

Meltzer said Jamaicans are tolerant of all other genres of music and reggae is an important and needed musical genre also worthy of the respect of the rest of the world.

Asked to describe the first time he heard reggae, he said, "I was in Philadelphia, Pennsylvania, at a convention and major labels had all sent samples of their best music. I had never heard reggae before but I was blown away. It was the most infectious sound and profound lyrics. The language was simple. It was Marley." He later met the genius and a 'friendship' developed from a one-hour conversation. "What impressed me about Marley was how knowledgeable he was for being largely self-educated. He had read extensively," Meltzer recalled.

He met Marley again a year later at a concert at Madison Square Gardens in New York and was flattered that Marley remembered him immediately. From then on, Meltzer made a promise to himself to do something in the genre and, after putting it off for some time, it has happened gradually. The CD will find its fans among the large and natural Caribbean markets in Canada, the USA and England, but Meltzer wants it to go global.

His ultimate goal, he said, is a day when he puts on a reggae album for which there are 10 million bootleg copies out there because people want it so bad. "I want the New England sound to be as big as TSOP (The Sound of Philadelphia), Mowtown, Stax and other unique sounds."

Is he on a mission to rescue reggae? Meltzer said it begins with the community and it's up to all of us where we set the talent bar, whether high or low. "We must define it. Artistes must be able to write and sing and gain recognition other than among your own opinion," he said.

Reggae, he maintained, must return to musicality, it's not just about a sound or gimmick with a beat that is gone in six weeks. "I am not putting down dancehall or hip-hop, they have their place. But we have to get the grooves back to foundation and learn from the old school about mass market and mass appeal," he said.

Reggae music is about Jamaica, Meltzer explained, but it must also relate to other cultures.

"Marley came out of the Trench Town experience but became a spokesperson for oppressed people everywhere, taking the music beyond the culture he grew up in - he saw the world with bigger eyes," he said. And, he concluded, the time is right to harness the available technologies to do just that.

"For my part, I hope Capsicum Records gets so big I need a bigger server!"