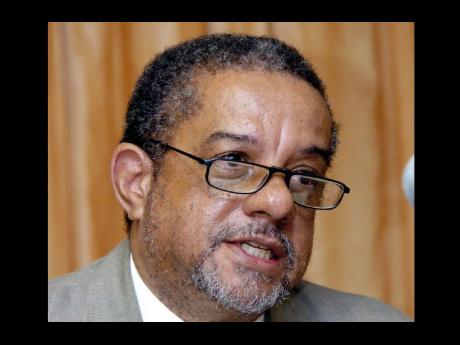 This article was presented at a Plan-ning Institute of Jamaica/Depart-ment of Economics seminar on The IMF Agreement: Implications for the Jamaican Economy at the UWI Library Multifunctional Room on February 25, 2009.

Jamaica's macroeconomic problems recall that other meaning of IMF: It's mainly fiscal. It is persuasively arguable that all the current problems of low growth, higher-than-desired inflation and interest rates and chronic public debt all result from governments' protracted inability to finance its expenditure without substantial reliance on borrowing.

Jamaica's crisis of debt returning to 140 per cent of gross domestic product (GDP) and debt servicing requiring 60 per cent of Government expenditure is the result of years of accumulated failure of government to balance its expenditure with the availability of non-borrowed resources. After improvements to the middle of the 1990s, Jamaica's public finances were significantly affected by the costs of resolving the financial sector crisis. The first years of the new millennium, despite failure to perform as well as expected, saw steady, if slow and uneven, improvements in the public finances. Over the last two years, factors, including serial overoptimistic revenue projections and the global economic crisis, have generated a marked worsening of the imbalance between government revenue and expenditure.

Correction of the problem through the IMF programme visualises a simultaneous reduction of the burden of interest expense and an increase in the surplus without fiscal expense (the primary surplus). The former has been facilitated by the Jamaica Debt Exchange (JDX), but the latter will require stronger collection of taxes and moderation of non-interest expenditure. The moderation of non-interest expenditure is expected to be facilitated by public sector restructuring, to be informed by a sitting task force. Divestment and restructuring of public enterprises is also expected to reduce the drain of these institutions on public finances.

The medium-term macroeconomic objectives of the programme are not spectacular. Up to 2013-14 growth is not expected to exceed two per cent per annum. Inflation is expected to fall to six per cent, but there are concerns about the likely impact of taxation, utility rates, user fees and oil prices related to international economic reco-very. A gradual decline in expenditure/GDP is expected but revenue/GDP, despite multiple tax packages and tax administration reform, is not expected to increase significantly. After the initial impact of the JDX, interest rates are expected to decrease slowly and, by 2014-15, the primary surplus would increase to nine per cent of GDP, the fiscal deficit would fall to about 1.0 per cent of GDP and public sector debt to 114 per cent of GDP. Net International Reserves are expected to decline sharply before the beginning of a slow recovery.

While the medium-term macroeconomic targets are not overwhelming, there are factors which place the near-term public finance targets at risk. Revenue expectations may be overoptimistic due to withholding tax and tax refunds due and to a continuation of very weak productive activity.

If revenue is facilitated by inflation, this will not only undermine the inflation objective but also interest rate, exchange rate and net international reserve objectives. There is a continued announcement of large debt-financed projects without any clarity that these can be accommodated within the tight budgetary constraints expected for the next financial year.

The expectations for eliminating public-enterprise deficits may be unrealistic, a prospect influenced by the most recent abortion of the sugar-divestment process. Despite the massive infusion of multilateral financing, Government may need significant recourse to financial markets sooner, rather than later, and may face refinancing challenges in the wake of the JDX.

While the medium-term macroeconomic objectives do not significantly reduce the susceptibility of the economy to adverse economic shocks, the near-term targets are fraught with risk. This then points to an examination of the structural objectives of the programme as being possibly the more fundamental targets for the multilaterals. The IMF itself recognises severe "downside risks" to the programme but hopes successful implementation of the structural


changes may set off a virtuous train of positive outcomes. It is
readily apparent that structural change that enhances capacity to meet fiscal
and other programme objectives will also enhance Jamaica's capacity to service
its debt, which will certainly increase in the near term.

Structural reform objectives, as they relate to the public
finances, include the following:


2.
Rationalisation and reform of Jamaica's public entities,
including divestment, mergers and closures.


3
. Unifying and enhancing the efficiency of tax
administration and sharply reducing the incidence of incentives and
"discretionary waivers".


4.
Establishment of a central treasury management system to
enhance the efficiency and cost effectiveness of government cash management.


5.
Legislation of a fiscal responsibility framework to
increase the certainty of attainment of programmed and budgeted fiscal
objectives.


6.
The enhancement of the active debt-management
capabilities of government.


Regarding tax policy and administration reform, there is concern
that the fiscal adjustment process has relied heavily on large tax packages
while fundamental expenditure reform awaits completion of protracted and
meticulous study. While this study is important, it is to be emphasised that
relying on increased taxes, in a severely depressed economy, has less certainty
of success than measured expenditure contraction. Revenue continues to
underperform programmed expectations.


The intended integration of tax administration is positive and it
is hoped that this lays to rest the concept of separation of customs as an
executive agency. This separation does not facilitate essential communication
between revenue departments and does not enhance the efficient integrated
management of fiscal policy.


A lot has been made of "discretionary waivers" but the reality is
that most of these waivers are legal entitlements associated with terms of
employment or the institutional status of religious, charitable or business
organisations. Administration may be tightened to limit abuse but, unless there
is legislative change within fundamental tax reform, there is not a lot of
saving to be anticipated.

The quantitatively largest problem for the revenue is the massive
antiquated system of tax incentives dating back to the 1950s. This system
relates to outdated perspectives on how to increase the diversity and dynamism
of the Jamaican economy and, while we understand that there is a significant
loss of potential revenue to these incentives, there is no economic accounting
for "benefits".


Regarding expenditure reform, the benefits of the JDX have to be
sustained by substantial near-term macroeconomic improvement to avoid reversal
of interest rate reduction. It is unfortunate that public sector reform,
including employment, wages and incentives, have to lag so far behind initial
efforts to arrest the crisis by tax packages.


Reducing public sector employment raises the issue of redundancy
costs and the matter of retaining and attracting high quality staff for the new
and improved public sector. There is no mention of public sector pension reform.
Freezing allocations for 2010-11, is, without a redefinition of scope and
functions, a recipe for inefficiency, waste and continued failure to meet
targets. There is also a need to discontinue the creation of public edifices
that have no capacity to pay for themselves.


The ambitious targets for public-enterprise deficits require more
detailed analysis of the several public enterprises that have been a public
financial burden. There will be continuing carrying costs for sugar and, while
targets may be adjusted for the costs of Air Jamaica divestment, these costs
will add to already heavy fiscal and debt burdens.

In holding the political directorate and public administration to
public account, fiscal-responsibility laws may lean more heavily towards
legislated fiscal targets or towards informational and operational transparency.
Putting targets in law is very appealing to an instinct that somebody gets
"locked up" for missing the targets. And then we ask "Who?". And then we realise
any deviation can be excused in the English language and that legislated targets
are not so binding after all.


The alternative is to maximise the public availability of
information before, during and after the Budget, subject to constraints of
peculiar sensitivity (e.g. exchange rate forecasts). This information should
include historical performance, policy objectives and intentions, short- and
medium-term projections, and risks to attainment. This is expected to facilitate
informed public critical perspectives and a means of keeping politicians and
administrators focused on and faithful to their stated objectives. The success
of the transparency initiative is dependent on the state of public education and
understanding and the vigilance of the press in the public interest.


To the extent that a fiscal responsibility framework is designed
to enhance political and administrative fidelity to prudent economic management,
it would be appropriate for draft legislation to be supported by public
education and public discussion. Jamaica does not need more cosmetic
legislation.


Colin F. Bullock is lecturer in the Department
of Economics, UWI, Mona. Feedback may be sent to
columns@gleanerjm.com.