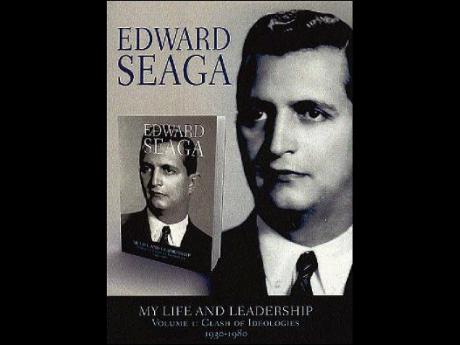 The hot news of the last week has been the damning American report on Jamaica which mentions the Christopher 'Dudus' Coke extradition request; Prime Minister Golding's sharp rebuttal and the heated discussion on the role and power of the reputed don of what has been described as "the mother of all garrisons", Tivoli Gardens.

In one of the busiest news weeks of recent memory - with the prime minister's report on the Armadale tragedy; the contractor general's indictment of the tourism minister on the American Airlines deal; the announcement of Air Jamaica's D-Day; the nurses' sick-out; the teachers' early warning signal; the heightened discussion over tensions in Jamaica-US relations and the continuing Wayne Chen visa saga - the launch on Wednesday of Edward Seaga's first volume of memoirs could be deemed of little interest in the present context.


That would be a huge mistake - and a primary reason why those tempted to think that way should get a copy of the book,
Edward Seaga: My Life and Leadership: Clash of Ideologies. 1930-1980
.

Edward Phillip George Seaga casts a long shadow over Jamaican politics. Not only because he is the only living politician to have served from the Jamaican Legislative Council in the 1950s to the new millennium when he retired from active politics, but because of what he has bequeathed. He is the father of Tivoli Gardens and the beneficiary of that dynasty of which Dudus is the latest successor.

In Jamaica, he was "the last great hope" of the leader of the so-called Free World, the United States, in the Cold War era of the 1970s when Michael Manley's embrace of socialism and closeness to Cuba's Fidel Castro raised alarm in Washington of having "another Cuba" in its backyard. Then, Seaga was the darling of the American Establishment and allegedly in bed with America's Central Intelligence Agency (CIA).

It was surreal to hear Karl Samuda from Seaga's party shouting "CIA" to 1970s leftist Dr Peter Phillips, who stood up in Parliament to back the US against the Jamaican position in the present stand-off. It is the Jamaica Labour Party's (JLP) leader who is today "staring down" the mighty US, in the words of one newspaper headline, and reminding, in effect, that "we are not for sale", while the People's National Party (PNP) is backing the US. How have times and situations changed!

It was precisely to give a historical perspective of Jamaica between the 1930s and 1980, more intensely from the 1950s, that Edward Seaga wrote this the first of a two-part memoir, he tells us early in this 367-page book published by Macmillan. It is no ordinary autobiography and will no doubt disappoint a number of persons because a lot of the juicy, behind-the-scenes stuff are deliberately omitted. He acknowledged early that some who have read the manuscripts complained that there is not enough of his personal life, "no side bars to relationships or activities of a non-political nature".

But there are some fascinating sidebars, made more cherished because of their rarity. There is the story of how he came to have the body of Jamaica's first National Hero Marcus Mosiah Garvey reinterred in Jamaica after 24 years; the delicate tightrope he had to walk and the astute negotiating skills he had to employ to work between Garvey's two wives to override sensitivities to get the body here. An absolutely gripping story made more intense by the scare he had when some ardent Garveyites, stung by the fact that it was a "white man" who brought back Garvey's body to Jamaica, started the rumour that it was not really Garvey in the casket but a log, while the family did not want any viewing. If you doubted Eddie's ability to react quickly to a crisis, you have to read the book to find out how he got around that one! It's worth the price of the book.

He tells about his girlfriends as a teenager and going to movies and dancing. There are interesting personal stories about Bustamante and Clem Tavares. There is one charming story of the Jackson Five and Mom turning up at his gate in the early 1970s when he lived at Temple Meads.

When he told then wife Mitsy that the Jackson Five were there, she thought it was a joke "until Mrs Jackson told us that they had been to Jamaica House but could not get to see Michael Manley who it was said was busy. The driver had suggested that he could take them to visit us. They spent the entire day relaxing, chatting, playing music and having lunch. Young Michael was fascinated by the aviary. And I


opened the door and he spent much of the time walking around on
the different levels of the huge cage as if he was in communication with the
birds".


There was the story of how he met Mitsy and the wedding. But
mostly, the book attempts to tell the story of Jamaica - of course, coloured by
his own perspectives, for no history can be unmediated and totally objective. I
paid particular attention to his recounting of the 1970s for that would be the
period that would pose the greatest threat to his objectivity. He did much
better than most would expect.


Every student of Jamaican politics and society should get a copy
of this book: Here you have one of Jamaica's most colourful and controversial
personalities, blessed with long life and still a raging and restless intellect,
giving you priceless reflections on important eras in Jamaican history.


And Seaga documents very well Manley's accomplishments in the
1970s. In fact, the book is an excellent repository of information on the PNP's
most noteworthy social achievements of the 1970s. Seaga exhibits admirable
fairness in dealing with this most contentious and tendentious period in our
modern history. "What was enduring (from the 1970s) was the far-reaching social
legislation which ... had impact nationally and went directly to the correction
of social alienation and deprivation of the rights of women and children,
settlement of employment disputes and other social problems experienced in daily
life by a considerable number of people."

Many might be surprised that the arch-critic of Manley in the
1970s actually wrote the following in his book: "The social reforms,
notwithstanding limited results in tangible performance, were of lasting value
in raising the social consciousness of the people. It was the rhetoric of
Michael Manley that raised the bar of self-esteem and racial pride among people
of African origin, in continuation of Garvey's mission."


Interestingly and commendably, he credits "Manley's repeated
references to the injustices of being poor and black ... that created a
significant shift in social awareness".


I wrote years ago that the left misunderstood and misrepresented
Edward Seaga. I am prepared to defend that thesis in any academic symposium that
the university organises to assess his political career - something which is
overdue. I have before called for the left to apologise to Seaga - who was
labeled a fascist and a racist. I, myself, never understood Seaga in the 1970s.
It was much later, after deep reflection and coming to know him personally and
reading his early speeches, that I realised how seriously I had misunderstood
him.


I was blindsided by his anti-socialist, pro-American rhetoric of
the 1970s. We need to see Seaga for the intense Jamaican nationalist he has
always been, and locate his reactionary foreign policy stance in the 1970s with
his own fears of the encroachment of a "foreign ideology" here.

I do not for a minute glamorise his past, particularly his role in
creating and buttressing Tivoli and facilitating a type of politics whose bitter
fruits we are still imbibing. But we must not be partial to history. One of the
aims of his memoirs, I am sure, is to rehabilitate his own history and possibly
to reverse some of the demonisation to which he has been subjected.


Stripping myself of misperceptions I myself had in the 1970s,
fostered in part by his own intemperance, excesses and pro-imperialist stance, I
can now see why he can write so calmly about Manley's achievements in the 1970s.
Seaga is the Jamaican nationalist
par excellence
. I dare say there is no
Jamaican politician who understands and appreciates black people and their
culture more than Edward Phillip George Seaga. One of the most damnable lies
ever perpetrated against him was that he was or is a racist. That belongs to the
political cesspool. No one who has examined the empirical data and who is not
intellectually lazy can subscribe to that view.


You must read excerpts of his speech delivered at the reinterment
ceremony for Marcus Garvey. Seaga has spent a lifetime affirming black people
and their culture, while much of the Marxist left here was marginalising race
and culture. The nonscientific, cynical hunch that Seaga's interest was purely
political is unverifiable.


Whatever Eddie Seaga's weaknesses and blunders, and there have
been many, our enormous, incalculable debt to him can never be repaid. I hope
this book will go some way to correcting the distortions of history; some of it,
I believe, not deliberate but due to our lack of understanding of this enigmatic
and complex man. His "haves and have-nots" speech is a classic in the defence of
oppressed and exploited peoples.


Seaga himself puts it well: "I have been labelled socialist and
capitalist. I have been correctly positioned as overemphasising the interests of
the poor while belabouring the need for increasing opportunities for wealth
creation at al levels. At different points in my life, I have had all these
multiple identities and more ... I cannot fit any single mould. Hence, I have
been very often identified as an enigma ..." Indeed.


In another memorable passage, he writes: "The same brainwashed
mentality that proclaimed everything from the Great House to be good and better
dictated that imported investment, imported socialism, imported federalism,
imported IMF diktats and imported globalisation are all good and better. We must
determine what is good ... or we will become modern-day slaves to new masters,
in a new colonial regime; and true independence will be a fiction."


An excellent summation of his own approach to politics and why so
many have not understood him, plagued as we are with the affliction of foreign
solutions.


Ian Boyne is a veteran journalist who may be
reached at ianboyne1@yahoo.com or
columns@gleanerjm.com.