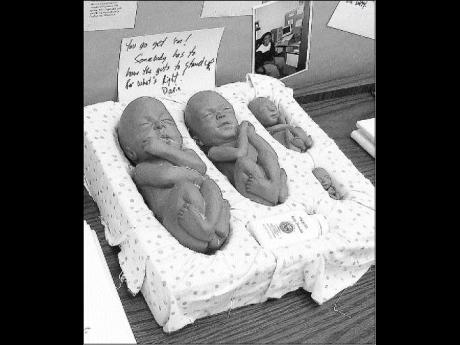 MADRID (AP): Spain last week approved a sweeping new law that eases restrictions on abortion, declaring the practice a woman's right and doing away with the threat of imprisonment, in part of a drive toward liberal policies that has angered conservatives and the Catholic Church.

The new law allows the procedure without restrictions up to 14 weeks and gives 16- and 17-year-olds the right to have abortions without parental consent. The senate's passage of the bill on Wednesday gives it final approval.

The bill, which brings the country in line with its more secular neighbors in northern Europe, is the latest of a series of bold social reforms undertaken by Socialist Prime Minister José Luis Rodriguez Zapatero, who first took office in 2004 and has ruffled feathers among many in the traditionally Catholic country.

Carmen Duenas, a spokeswoman for the leading conservative opposition Popular Party in the Senate, accused the government of trying "to bring in unrestricted abortion".

"The government wants to do away with one of the pillars of Spanish society, which is the family," she said.

But Senator Leire Pajin, the ruling Socialist party's No. 3, said the new law "paid off an outstanding debt" to women, offering them a choice and bringing an end to illegal abortions.

Under the previous law, which dates back to 1985, Spanish women could in theory, go to jail for getting an abortion outside certain strict limits - up to week 12 in the case of rape and week 22 if the fetus is malformed.

But abortion has been, in effect, widely available because women can assert mental distress as sole grounds for having an abortion, regardless of how late the pregnancy is. Most of the more than 100,000 abortions carried out each year in Spain were early-term ones that fell under this category.

The new bill was automatically approved when a majority of senators rejected three proposals by conservative parties to have it vetoed, and then rejected a total of 88 amendments.

It will be published in the state bulletin next month and will take effect four months later.

The part of the new law allowing 16- and 17-year-olds to have abortions without parental consent puts Spain in line with other European countries such as Germany, Britain and France.

It was among the bill's most controversial elements. In the end, the government amended it so that minors must inform their parents or legal guardian if they plan to undergo an abortion, but do not need their permission. They are, however, exempt from this requisite if they can show that fulfilling it would expose them to violence within their family, threats or coercion.

Under Zapatero, Spain has also legalized gay marriage and made it easier for Spaniards to divorce.

Rallies against abortion reform drew hundreds of thousands onto the streets in recent years.

The new bill also permits abortion up to 22 weeks if two doctors certify there is a serious threat to the health of the mother, or fetal malformation.

Beyond 22 weeks, it would be allowed only if doctors certify fetal malformation deemed incompatible with life, or the fetus were diagnosed with an extremely serious or incurable disease.