Millions spent on bullets - Approximately $140m in one year 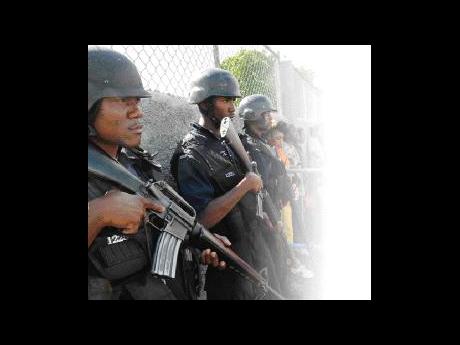 ARMING THE police force is not cheap.

At today's rate of exchange, that amounts to approxi-mately $140 million on ammunition for the Jamaica Constabulary Force (JCF).

The documents also revealed that "purchases are generally made once or twice per year".

According to the documents obtained from the Ministry of National Security: "Since April 2002, purchases of ammunition and weapons have been made from various suppliers," including Winchester Ammunition, Heckler & Koch and Glock America.

"Formerly, the force obtained its stock through a local middleman, which was discontinued," said the document that was prepared in the office of the commissioner and signed by Owen Ellington, acting commissioner of police.

"In seeking supplies, the assistant commissioner of police would make the necessary enquiries, and all quotations would be forwarded to the Jamaica Constabulary Force's finance branch to complete the procurement procedure," read another section of the document.

It stated further: "On completion of the Contracts Committee's decision, the order is placed and the Ministry of National Security issues the end-user certificates."

The official document made mention of Taylor and Associates, an arms-brokering business in Lauderhill, Florida, that was at the centre of a major security blunder involving the JCF.

But the police argued that the botched deal with Taylor and Associates was a "first-time purchase".

Notwithstanding, senior operatives in the constabulary were embarrassed after US authorities advised them that they bad been buying bullets from an unlicensed dealer. That dealer - Lance Brooks - is now behind bars.

But not before the blunder cost Jamaican taxpayers close to US$61,000, as the State was only able to recover US$20,122 of the US$81,100 (approximately J$6 million at the time) that was paid to Brooks for 270,000 rounds of jacketed soft-point ammunition.

"In order to become compliant with human-rights standards, a decision was taken that the organisation should move towards firearms and ammunition that would be suitable for policing a civilian environment.

"The current type of ammunition procured is, therefore, the jacketed soft-point ammunition, which is less likely to overpenetrate an individual, and thereby reduces the risk of injury to innocent persons," read a section of the document that outlined the policy that guides the purchase of weapons and ammunition for the police force.

The documents also revealed that the assistant commissioner of police for the Firearm and Tactical Training Unit, in conjunction with Police Headquarters Stores and Armoury, are responsible for ensuring that adequate stocks of bullets are available.