Turks and Caicos demand democracy - To march against UK takeover 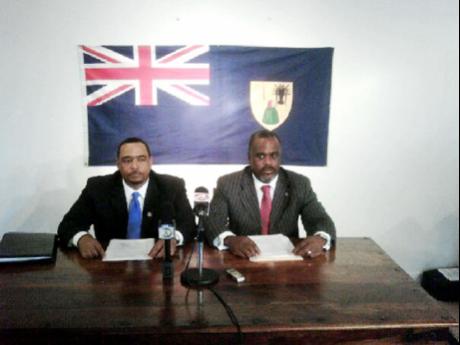 Miami, Florida: BOTH POLITICAL parties in the Turks and Caicos, the Progressive National Party (PNP) and the People's Democratic Movement (PDM) will unite in a march tomorrow demanding immediate return to democracy and self- rule.

The move comes on the heels of an intended enactment of a new constitution for the country by the British.

Over a year ago, Britain took back interim autonomy of the country, placing one of its governors in charge after former premier Michael Misick, who was embroiled in a huge scandal of abuse of power, was ousted from office.

Both PNP leader Galmo Williams and PDM head Douglas Parnell are accusing the British of high-handedness. "We demand a full referendum of the people of the Turks and Caicos Islands before any changes to our constitution is made, for it is the only way to fully know and understand what the settled will of the people of these Turks and Caicos Islands is," stated Williams at a press conference in Providenciales last Thursday.

According to his counterpart, the proposed reform has been rejected by indigenous people because it excludes them.

"Constitutionally, we are in a neutered state and the weapons to disenfranchise Turks and Caicos Islanders from our rights have long been formed."

Urging their supporters to unite and march on Commonwealth Day tomorrow, the two concurred. "We must march to show our support not for the PDM or for the PNP, but for the Turks and Caicos Islands because we need to send the message loudly and clearly both far and near that the people of these Turks and Caicos Islands are united and are fed up with how we are being treated, mistreated and marginalised in our homeland."

It is the first time in the country's history that the two political parties have stood on the same platform defending the same cause.

United, the two feel that they can defeat their "common opponent - a spirit of vengeance, fear and ignorance perpetrated by a system of governance and of minority forces who are against the interest and rights of Turks and Caicos Islanders".

Both parties are calling for the removal of Governor Gordon Wetherell, who they contend does not have the support of the majority of the people. "The people of these Turks and Caicos Islands demand an immediate return to democracy and self-rule," stated Williams.

They describe the current rulers as opponents fighting and diminishing their rights and privileges, while seeking to unjustly bind their country with greater levels of destructive policies that will not bring about the change needed to spiritually, politically, economically and socially develop the country. "Put simply, we have to stand to stop our voice from being silenced and our people overshadowed," said Parnell.