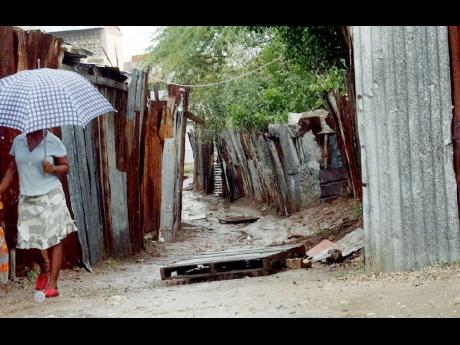 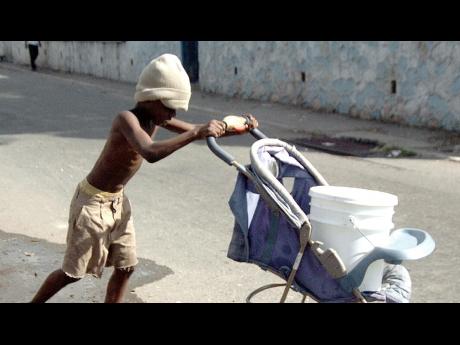 This little boy pushes a bucket of water in a stroller on Gem Road in the Maxfield Park Road area. This community is among those that are sometimes starved of basic services on account of violence. - photos by Peta-Gaye Clachar/Freelance Photographer 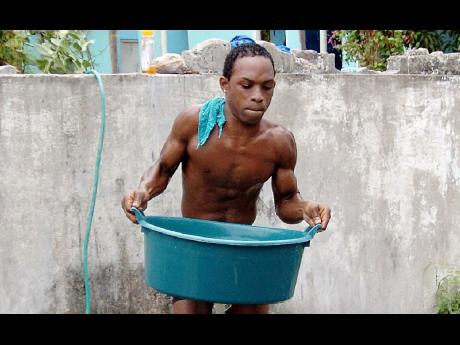 This man fills his containers with water from a low pipe on Barnes Street off Maxfield Avenue.
1
2
3

Tried to get a job today but

When dem see the application

If this is really where you reside

THE HAUNTING lyrics of the 2007 hit song from reggae artiste Etana speak to a reality that hundreds of residents of inner-city communities across the island face daily.

From Tivoli Gardens to Rockfort in the Corporate Area to Farm in Clarendon or Flankers in St James, residents tell a similar tale.

They are denied some basic ser-vices, including state-sponsored ones, because of their addresses.

Judith Whilesof a Kingston 13 address has lived in pain over the last four years as she watched employer after employer reject her daughter's applications for jobs.

No one can convince Whiles that this is not because of the address on the application form.

"She was successful in eight subjects in high school but to date has not received a job. All she is getting is negative responses," the disconsolate mother said.

"As soon as them ask persons in this community their address, the applicants are told that they are not qualified for the position," she complained.

Whiles claimed that her entire community encounters strong and entrenched prejudice from the society as a whole.

That is no surprise to Dr Leachim Semaj whose work with potential employers and employees has led him to conclude that the address of the applicant can determine if he or she is given the job.

According to Semaj, the stigma attached to persons in some volatile communities force the residents to give wrong addresses on their applications.

"The stigma can do two things, the people will either accept it and do what society say they are doing, or they will prove society wrong by changing," said Semaj.

Mark Brown, a resident of the Kingston 20 community of Maverely, has seen first-hand the damaging impact of that stigma on a community.

According to Brown, his wife was deprived of the benefits of a home visit after she gave birth at the University Hospital of the West Indies.

"Why are we paying taxes if we are not going to benefit from essential services. What do they expect to happen to the average person who can't afford to get to the facilities for the treatment?" Brown questioned.

Chief executive officer at the hospital, Dr Trevor McCarthney, did not speak to the specific case but admitted that there are some communities which are not visited by his staff.

According to McCarthney, it is an established policy of the hospital that certain areas would not be visited by the staff for various reasons such as hilly terrain and violence.

He said persons living in areas which are prone to violence have to visit the hospital for their follow-up examinations.

Already facing discrimination from potential employers and some state agencies, the people of many inner-city communities also have to make do without what many other Jamaicans take for granted, the home delivery of meals from the fast-food establishments.

"If you live below Cross Roads in the Corporate Area, don't even think about ordering a pizza and expect it to be delivered," a resident of Fletcher's Land in west Kingston reported.

He noted that there are communities only metres away from the fast-food outlets in which no deliveries are made.

But Pizza Hut defends its decision not to travel to what are essential 'no-go areas' for many Jamaicans.

"Every so often the riders lose their bikes in these areas, so it is now a policy that we don't go in these areas," Ricardo Tomlinson, a customer-service representative of Pizza Hut, told
The Sunday Gleaner
.

That is an issue which Semaj believes the people of these marginalised communities will have to address.

He argued that the issue of the 'wrong address' is not one-sided as some residents of these communities act as hindrances to other hard-working, decent residents who are striving to achieve their goals.

"I know of many persons who, because they live in a certain area, can't participate in work activities that go beyond the normal nine to five period," Semaj said.

He believes the residents can play a key part in changing the perception of their communities and that message is shared by Etana.

It's easier to give into the

It's harder to get over when you

try to do right

Just stay focused and keep your

Been through school, passed

Graduated above the rest

And yet the society still looks down

They do this, why?

They don't want us to try