Businesses dry up after trains move out 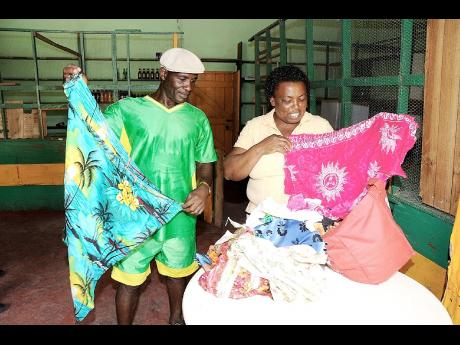 Monica Miller-Rose (right), a dressmaker, used to sell clothes to tourists on the train. - Ian Allen/Photographer

MONICA MILLER-ROSE runs one of the few shops still open across the road from the Catadupa train station in St James.

The spark in her eyes and the excitement in her voice make it very clear that she still thinks of herself as a dressmaker rather than a shopkeeper.

Outside her shop, she opens her arms - and her eyes - to conjure up memories of days when the street was busy with the market that sprang up around the train service.

Miller-Rose fills in the blank spaces of asphalt and buildings with images of bustling crowds, wares (especially clothing and fabric) on display all along the street, which was awash with colour.

Selling clothes to tourists on the trains running to Appleton Estate from Montego Bay was a major part of the railway-centred commerce. Miller-Rose, along with other dressmakers, was part of a special quick-turnaround service.

Although they had ready-made clothes, many times a potential client did not see what they wanted in their size. So they would choose a piece of fabric, the dressmakers would take their measurements and they would continue on to Appleton for the tour.

"Believe it or not, when dem come back clothes ready! When dem see that dem get crazy!" Miller-Rose said.

Often they would order more and the dressmakers would take the 'Manners' train (which carried schoolchildren) and delivered more clothes to the hotel where the tourists were staying.

Then, on the way back, the dressmakers would spot a potential customer and try to pick up more business for the Catadupa stop. "Money used to make crazy," Miller-Rose said.

The train also figured in another part of their business, as they would get supplies in Kingston on Saturday or Monday, coming down on the "night diesel".

In the present, though, all that is gone and Miller-Rose looks at the area again with her eyes on the present and says: "You no see how Catadupa look like duppy a walk seven days a week?"

Still, she says: "We jus' haffi have two piece a material in case you see a one idle bus come through."

She goes into the shop and takes out a basket with the pieces of cloth and T-Shirts she still keeps handy, although the sewing machine is at home.

There was a time when she and other dressmakers would set up inside Ms Will's shop, in one corner of the street, but that building is now in disrepair.

Dolphy Tomlinson was also part of the tourist train business, along with his wife.

Now he farms, while she has a job at Tryall in Hanover. "It pretty, it pretty so till when tourist used to come," he said.