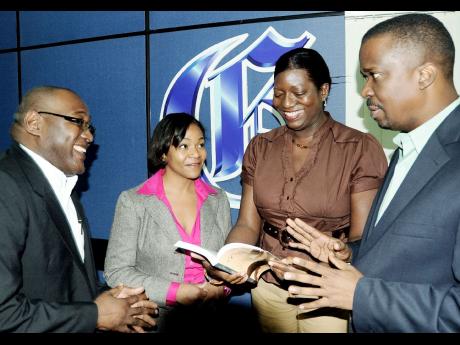 Reverend Devon Dick (right) speaks to Garfield Grandison (left), The Gleaner's editor-in-chief, about his new book 'The Cross and the Machete', at the company's offices last week. Looking on are Jenni Campbell (third left), The Gleaner's managing editor, and Christine Randle-Wray, managing director of Ian Randle Publishers. Reverend Dick, a Gleaner columnist, launched the book on Tuesday at the University of the West Indies. - Rudolph Brown/Photographer

RECOGNISING GENDER equality and women's empowerment is fundamental to the global mission of the United Nations (UN) to achieve equal rights and dignity for all. This year's observance of International Women's Day tomorrow under theme 'Equal Rights, Equal Opportunities: Progress for All', is a call to action to renew efforts to ensure full realisation of the landmark Beijing Declaration.

World leaders have developed a road map to realising equality of opportunity for all, enshrined in a series of conventions and protocols including the Millennium Develop-ment Goals (MDGs), the Beijing Declaration and Platform for Action, and the Convention on the Elimination of All Forms of Discrimination against Women.

Women generally represent the majority of the world's poor and face injustices stemming from gender discrimination. In a message to mark the day, Minh Pham, United Nations, Resident Coordinator in Jamaica, commended the Government and people of Jamaica for the strides that have been made towards the achievement of gender equality.

"Among other things, Jamaica has improved its collection and use of gender-disaggregated data to guide policy and programmes critical legislation and legislative reform have been introduced to ensure greater protection of the rights of women; Jamaica's National Development Plan - Vision 2030, includes a gender-sector plan; and, a newly developed national gender policy, when enacted, will further promote gender equality and women's empowerment," he said.

In the face of these challenges, the UN official affirmed the continued commitment of the UN country team to continued collaboration with the government and people of Jamaica and reiterated its pledge to continue to support national efforts "to ensure equity in the status of women and men; and the full achievement of the MDGs in Jamaica".

As part of the observance of International Women's Day, a review of the achievements since the implementation of the Beijing Plan of Action in 1995 will be conducted at UN headquarters in New York, during the 54th Session of the Commission on the Status of Women, March 1-12.

Jamaica has submitted a country update for this review.

Locally, the UN country team is collaborating with the Bureau of Women's Affairs to host a discussion forum, the theme of which is 'The Status of Women: The Impact on Women's health with special reference to HIV/AIDS'. The forum will be held at the Jamaica Conference Centre tomorrow, beginning at 1:30 p.m.