Anya Schnoor, not afraid of the top job 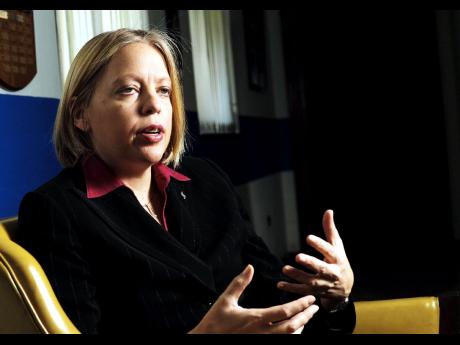 She is not yet 40 years old, but already her résumé reads like many individuals' lifetime of work. On Monday, March 1, Anya Schnoor took up duties as Scotiabank Group's executive vice-president, wealth management and insurance. She also continues to hold the position of chief executive officer of Scotia DBG Investments. Schnoor brings a wealth of experience to the new responsibilities, having made her debut in the financial industry in 1993.

Outlook
chatted with the St Hilda's High School past student on the morning of her first day on the job. She is calm, articulate and very confident in her knowledge of her subject areas. So, it is not surprising that she could see herself in the top job. But that is for the future; whereas Schnoor thinks it's only natural for career-minded people such as herself to strive for the top, she sees it as a huge responsibility.

"Scotiabank has a legacy of 120 years, and to protect it would be an enormous privilege, it would be the pinnacle of my career, but I am also interested in regional opportunities that would give me a chance to explore our great operation throughout the Caribbean," she told
Outlook
with candour.

But just where did the journey begin for this astute banker?

The descendant of Germans who settled in Jamaica in the '30s, her mother was a teacher in Mandeville, Manchester, and her father, who first worked at Wherry Wharf, was a St Ann-based businessman. She has a brother who is in the family business and a sister who lives overseas and works in the hotel sector. Home has been Brown's Town, St Ann, since the '60s. She loves rural Jamaica and would return if all things were equal.

Though she would have loved to have had a husband and family, Schnoor's career has not left time for that; but if the opportunity comes, she would welcome it. Her ideal man would be someone who is funny, not introverted, loves the outdoors and is a good potential father, but, most important, he has to love her. Schnoor, who also loves a good soca party and carnival, hardly ever misses the annual revelry in Trinidad.

And how did it start for the woman on a fast track to the top? Schnoor credits her accomplishments for having received the chance to run a small company (Eagle Unit Trust) very early in her career.

"I made the best of it, set goals for myself and learnt early that it's not a one-man band. I surround myself with good people who travel with me from job to job," she revealed. Schnoor has subsequently built a network of key individuals.

"It's a good group, we work hard to build together," she said, noting that there can be huge mistakes if persons focus on themselves. She said that invariably when ego steps in, it's too late to realise that it (job/position) is not about you.

The banker credits her rural upbringing for grounding her and instilling in her the core values that have helped to shape her view of life.

"I am a humble person and St Hilda's had a lot to do with that," she noted.

So grateful is she for the foundation she received at the school, she has established a scholarship from her personal funds - in her late father's name - for a needy student of the institution.

There will now be three areas of responsibility in Schnoor's portfolio. The first is to expand the insurance arm of the company so that more choices are available to clients. The second will be to fully explore all the potential of private banking, thus taking advantage of the huge potential in the need for investment advice for customers, both locally and overseas. In so doing, Schnoor and her team will, through the bank's private banking services, help customers with trust arrangements, estate planning and more. Third, Scotia DBG is the most profitable of all its financial peers right now and, under her watch, the goal is to to keep it surpassing the others by far.

Of the recession that now has Jamaica in its stranglehold,
Outlook
asked the banker how much longer she forecasts Jamaica to remain in it and what could be done to ease its effects on the country.

Schnoor feels that much will depend on how quickly the United States and Europe recover and return to economic vibrancy.

"We will also have to see a recovery in sectors like bauxite when companies reopen for business and people return to work. People are cautious now, they are not spending as much, tourists are coming but reports from in-bond merchants say they are not shopping."

Recovery also means that "we need to make it easier for taxes to be paid. The system as it is now is too complicated, the income tax department is understaffed and these are factors that lead people to attempt to beat the system," she said.

To combat this, Schnoor thinks

that those in charge need the political will to seriously go after
persons they know are not paying taxes.

"For example," she said, "when someone who has no obvious means of
income suddenly starts driving a BMW, we need to find out what the source was.
And, on the other hand, taxpayers should be able to see what they are getting in
return, such as good roads."


Asked what sectors she (and the bank) would encourage and finance
for potential entrepreneurs who want to venture into now, she cited the
agriculture and tourism sectors as two areas that still present huge untapped
potential.


"Agriculture can employ many people if the emphasis is placed on
niche products. Prospective entrepreneurs should take advantage of efficiencies
such as greenhouse technology and realise that there is much to be gained from
going back to the land," she said.

more needs to be done

As someone from a parish where pimento once flourished, Schnoor
expressed regret that the pimento and ginger once growing abundantly there seem
to be crops of the past, yet the flavour of Jamaican ginger is so unique and
distinct. In spite of all the talk, Schnoor does not think enough emphasis has
been placed on tourism.


She opined that we are joking if, in 2010, in some parts of the
island, farmers are still using donkeys to transport goods to markets, and we
are still importing so much fresh produce in a country that has so much arable
land.


"We are already blessed geographically, both in topography and
location in relation to the main markets, but look at the squalor in what is
supposed to be prime tourist resorts. It's appalling," she noted. She wonders
why we still do not have a theme park dedicated to the memory of reggae icon Bob
Marley, yet his name has instant recognition globally.


Schnoor is disappointed that tourism has the potential to employ
many persons yet we are still to make a decision that will get casino gaming
going here. That alone would add a new dimension to the industry, as would
improving Portland to a destination for high net worth clients. Medical tourism
is also another untapped area that Schnoor would like to see prospective
investors for.


She cited towns like Montego Bay and Ocho Rios that need urgent
attention. The latter is confusing, "compared to what obtains overseas. Taxis
have no rules governing their movement, the city floods in sections when it
rains. The former has now been taken over by criminal elements, making it a most
feared place for locals. We are not serious about tourism; if we were, no one
could compete with us," said the Scotia exec.


When the time comes to step out of or up from this aspect of the
job, Schnoor would like to see Scotia DBG still maintaining its position as the
best model in the industry, She would also like to see the insurance arm's suite
of products expanded, with attractively priced benefits and private banking grow
to become a very large part of the group's offerings.