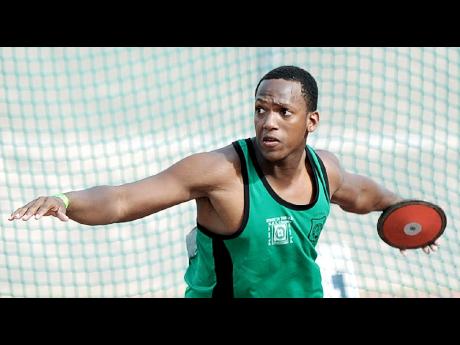 Traves Smikle of Calabar High and St Hugh's High's Candecia Bernard both set national junior records in winning the boys' and girls' Under-20 discus finals on the opening day of the two-day Carifta Trials at the National Stadium yesterday.

Smikle threw the discus 59.30 metres to beat the old mark of 58.88m. His schoolmate, Chad Wright, also went beyond the old record with 59.30m to place second. Third in the event was Rashane Cunningham of Kingston College, 50.50m.

On the track, Odane Skeen of Wolmer's Boys took full advantage of an 'illegal' 4.0 metres per second (mps)-following wind to upstage the Under-20 boys.

In the girls' Under-20 final, Glengoffe's Natasha Morrison streaked home in 11.47 ahead of Danielle Williams (11.52) of The Queen's School and Antonique Campbell (11.77) of Herbert Morrison. The wind speed was 3.0mps.

Holmwood Technical's Kadisha Dallas, with a wind speed of 2.2 mps, captured the Under-17 girls' 100m in 11.75 with Channiel Johnson of William Knibb second in 11.82 and Vere Technical's Satima Chambers third in 12.01.