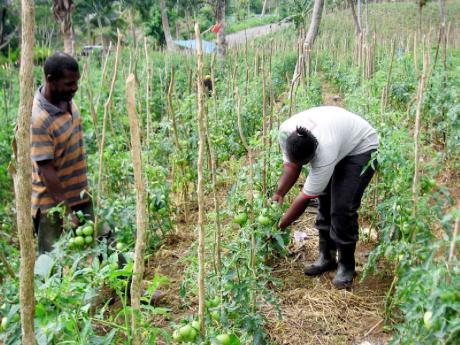 Two of the 11 workers employed on Karen Tamasa's fruits and vegetable farm carry out their regular duties. - Contributed 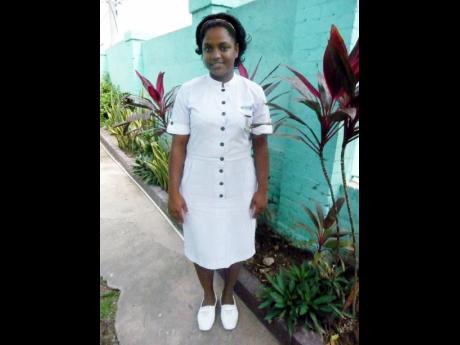 Karen Tamasa is now on her way to becoming a certified nurse, while juggling the role of being a farm owner and operator. photo by latoya grindley
1
2

She gained islandwide attention at the age of 19, having been recognised as a young entrepreneur in a field that many women her age would not have considered.

Since then, Karen Tamasa, the young farmer, has received many accolades for her entrepreneurial skills and success, including the notable Prime Minister's Youth Award in the area of agriculture and the Governor General's Achievement Award. She also gained the title of St Mary Farm Queen.

Tamasa still owns and operates a flourishing fruit and vegetable farm. With a lot of her crops now being reaped, Tamasa has five acres in full production growing tomatoes, cabbage, melon, callaloo and Scotch bonnet peppers, and employs 11 staff members. "I have 10 full-time workers on the farm, as well as a farm manager." Tamasa who started to take farming seriously at around the age of 12, inspired by her parents who are themselves farmers, has accomplished a great deal at a relatively young age of 22.

Adding to these achievements, Tamasa is now studying to be a nurse, and is in her third month at the National Academy in Kingston.

Nursing, she says, like agriculture, was always one of her interests. "I liked nursing from before agriculture but the opportunity for agriculture came first. Agriculture will always be there and nursing is similar to that field because just as how you care for people, you have to care for your crops."

Now juggling both the role of overseeing her farm and being a student, Tamasa says she has little time on her hands. "Twice per week I will travel to St Mary to see my farm, as I live in Kingston now. It is a lot of work but I don't have time to murmur because nothing is impossible to me."

Wearing the hats of farmer, student and counsellor, Tamasa has earned the name 'superwoman' from some of her peers. She loves giving advice, encouraging words and helping others to persevere. "I like to motivate people, especially if they are considered a failure. "It is natural for me to do this."

The high achiever says she has offered her services to people she is acquainted with and to total strangers.

In years to come, the 'Jill of all trades' has high hopes for her farm. "I should have a farm between 10-15 acres in full production. Right now I have five."

A seasoned farmer, Tamasa doesn't have to worry too much about securing buyers for her products as she already has a steady market which includes supermarkets.

As it relates to the growth of the agriculture sector, the experienced young farmer says this is dependent on education and less importation. "Just like how sports gets attention, agriculture needs that. A lot of unemployed people could go into agriculture but it is not reaching them. Educate them and let them know that it is not dirty work, let it be interesting. Farming is about producing food to eat; it is a cycle."

She continues with the issue of importation. "Why are we importing things like carrots that take such a short time to reap? If the reason is that people are not buying local produce because it isn't attractive, then teach farmers about presentation."