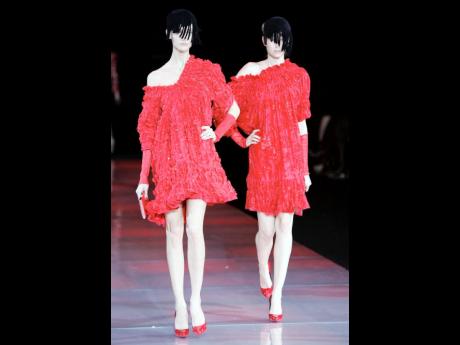 Even after Brazilian model, Ana Carolina Reston who weighed 88 pounds when she died in 2006 of complications from anorexia, the fashion industry is still at odds with the perfect size for models.

This comes in light of the recent controversy with Canadian model, Coco Rocha, who told both the
New York Daily News
and the
New York Times
that she is losing work because, being a size four, she is considered fat. Rocha was directly quoted in the
New York Times,
"I've been told to lose weight when I was really skinny. You know what, I've stopped caring. If I want a hamburger, I'm going to have one. No 21-year-old should be worrying about whether she fits a sample size."

The release of those articles created a stir. But, not long after, according to several websites, Rocha flat-out denied she ever insinuated or directly said that she was too fat for the runway.

Also, the
New York Daily News
reported that in a recent symposium held by the Council of Fashion Designers of America, designers, models and editors discussed raising the sample size. What came out of that symposium as stated in the newspaper was that, "the industry standard set for runway and magazine photo shoots, should be a size four. Right now, it's zero. Designers and agents alike know that they're setting the bar for boniest - and that it's set pretty high."

The Sun
, in a March 4 article stated, "The Canadian beauty's revelation reignited the controversy over rake-thin models who are often copied by vulnerable young girls.

The fashion industry moved away from size-zero catwalk queens following the deaths of two anorexic model sisters in Uruguay in 2006 and 2007. And models considered too skeletal are banned at the current London Fashion Week."

Plus-size models do have their place as Crystal Renn, who is 5' 9'' and weighs 165 pounds, hit the London catwalk, just on the heels of the Rocha controversy, in the collection of British designer, Mark Fast.

On the local scene, Pulse Investments Ltd last year launched their full-figured model contest. Romae Gordon, general manager of Pulse, told
Flair
that the emergence of the plus-size model is not directly a consequence of the issues raised with regard to the weight of standard-size models. She further stated that Pulse, in particular, has been considering a competition and the development of a plus-size division for a number of years.

"It was timely for us to go this route last year. The advent of several brands targeted to plus-size models facilitates more business activities in this area of modelling; therefore, the typical processes of discovering and developing a model bears more significance now with regard to the possibilities of pursuing a meaningful career for this cohort of the industry," said Gordon.

Gordon pointed out that it is also important to note that plus-size modelling is an emerging aspect in the fashion business. Thus, the development of models for jobs in this area will take some time as the awareness grows and more women see greater possibilities to pursue a career in this area.

"Naturally, this impacts on the number of suitable models available for advertisers, and designers to choose from. We generally do not expect a shift from the bookings of traditional models in the industry as a consequence of the emergence of plus-size models. Instead, we anticipate a steady and increased business flow in the area of plus-size modelling, as awareness and the value of celebrating women who are larger grows."

She added that there is every indication that the two facets of the industry can operate on a parallel basis.