Gumption a plus for math quiz hopeful 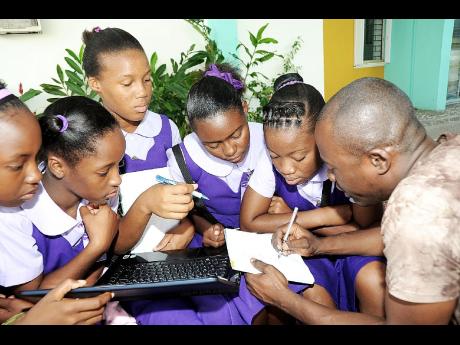 Nine-year-old mathematics whiz, Calainia McKnight, was the topic of discussion as she sat among hundreds of high-school students in Assembly Hall at the University of the West Indies (UWI), Mona, on Saturday.

Calainia was competing in Round One of the 2010 Jamaican Mathema-tical Olympiad.

The grade four student of Glen Stuart Primary in St Elizabeth told
The Gleaner
she could not pass up the opportunity to match her intellect with the more than 300 high-schoolers taking part in the event.

"I wanted to do the exam to get the experience ... . Yes, I will be coming again if I am not successful," the aspiring business associate/ medical doctor said.

The petite nine-year-old said although some aspects of the exam proved challenging, she was confident of her chances of making it to Round Two.

"The first part of the exam was a bit difficult, but I used a method to solve some of them ... . I think I will pass," she said, keeping her strategy close to her chest.

"She likes to experiment ... . I see her as a chemist, as she does a lot of mixing (of chemicals) around the house," Mrs McKnight said.

"She loves mathematics ... . I took some students here today and I thought I would just allow her to sit the exam ... . She grew up in a home where we all appreciate mathematics ... . Her sister, who is a medical student here at UWI, has set the pace for her," she said.

The students are competing for a chance to take part in the 2010 regional Mathematical Olympiad to be held in Puerto Rico in May. The event will see Jamaica, Barbados, and Trinidad and Tobago becoming the first English-speaking Caribbean countries to enter.

Lecturer in the Department of Mathematics at the UWI and chairman of the organising committee, Raymond McEachin, said Jamaica's entry into the competition was aimed at fostering a deeper appreciation for the subject area.

"We want to have a visible programme that can put mathematics in a better light ... . We believe that this will do a lot for mathematics in Jamaica," he said.