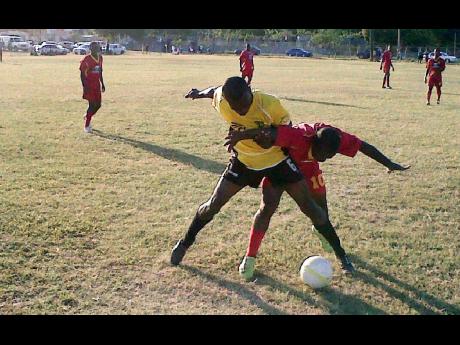 A goal in either half from striker Eric Allison powered York United to an important 2-0 victory over parish rivals Bath, in the Eastern Confederation Super League at the York Sports Complex yesterday.

The win moved the St Thomas team to 20 points and fourth spot, leapfrogging Bath, who started the game on 19 points.

After a timid but physical start from both teams, the home team slowly started to assert themselves midway to half, enjoying the better spells in their opponent's attacking third.

York were, however, upended by a combination of stout defending and poor execution on the final balls, as both teams wrestled for dominance.

It took 20 minutes for the first real chance for a goal. York's Kenton Williams forced a save out of goalkeeper, Xavier Henry, who had to scurry to his right to parry the 20-yard drive around his right post.

The home team were again on the prowl 10 minutes later, this time Richard Allison sent a ferocious shot inches wide of Henry's left upright, after the Bath defence failed to clear their lines.

Bath managed to come to life shortly afterwards, and came agonisingly close to stealing the lead on the 35th-minute mark, after Fredrick Thompson forced a goal-line save out of goalkeeper Donald Atkinson, when he met a diagonal pass in the penalty area.

Thompson was at it again from the ensuing corner, but the visitors could find no way beyond the York back-line.

The host team finally made the most of better possession play after 40 minutes, taking the lead when Allison out-sprinted two defenders and tucked his shot under the advancing Henry.

Bath should have equalised in the 54th minute after they were awarded a penalty for a handball in the box. However, Rion Beckford could not make the most of the opportunity, dragging his shot wide of the right post.

After receiving a pass from the left from Kemar Smith, Allison hit the ball into the net to double the lead at the 59th minute.

Both teams traded opportunities as the game progressed, but neither could add any more goals in the keenly-contested encounter.

York's Kemar Seivwright got a red card on the 90-minute mark for his second bookable offence.

Patrick Barclay, coach of York United, welcomed the win and described it as a response to their midweek Flow Champions Cup elimination at the hands of Granville.

"This game is a rebound from the Champions Cup loss. We are creating chances, but we are not making the most of them," said Barclay. "At the end of the day, the objective is to be in the top four. Once we can maintain our focus, we should be able to win this league."

"Based on our plans coming into the game, we never managed to execute. We didn't play good as a team, most players had a bad game," he said.

Meanwhile, Brazil stayed atop the 10-team standings with a 2-0 win over Rising Starz at Drax Hall, St Ann, yesterday, as they pushed their tally to 25 points.

In another match yesterday, Manchioneal beat Albion 1-0 at Jones Park in Portland.

Two matches that were slated to be played yesterday never materialised due to a mix-up: the big clash between joint second-place teams Star Cosmos and St Ann Bauxite, which should have been played at Clembhards Park in Port Maria; and the other between Brazil and Port Morant United.