Doctors show range of talent for cancer cause 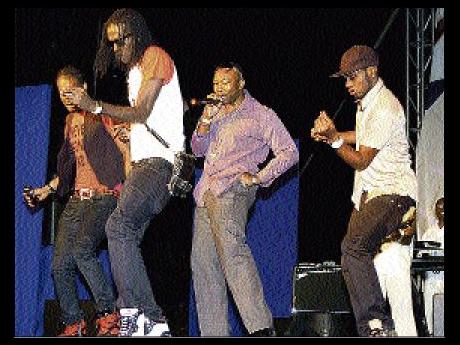 Emcees Dorraine Samuels and Michael Anthony Cuffe knew beforehand the title of each individual performer, save the final two, at Sunday night's Doctors Onstage for Cancer at Jamaica House, Hope Road, St Andrew. And members of the audience - some dressed for the coldfront chill while quite a few ladies chose to look hot rather than keep warm - saw a side to the women and men of the stethoscope which was quite different from their office demeanour.

However, whether it was the fear that a frigid member would snap, or the atmosphere of too many doctors in the house, that audience, though showing consistent appreciation, and reportedly appreciably larger than last year's, proved a hard one to move. It was left to the tried-and-proven panacea (if not cure all), humour, to really shake them out of their rigidity, despite the doctors presenting a good, wide range of talent in the prostate cancer awareness effort for the Jamaica Cancer Society.

There was laughter too when it was announced that Dr Mike Mills, who stood out front and played the bass as the night's band Fab Five (clad all in white save for one horn player's black hat) held down the groove to
No Woman No Cry
and
One Love
, had been practising the instrument for all of six months. It was clear, though, that the doctors took their performances seriously and had invested a significant amount of effort in their brief time on stage.

Dr Audley Betton, himself a cancer survivor and one of the Casual T quartet of performing doctors, did
Lean On Me
and
I'm So Glad That We Understand Each Other
, his genial nature coming through to complement good singing. Dr Bill Aiken supplied that first shake-up of humour, declaring that he was not a "punaany poet" before doing
The Living Temple
, a poem which examined the structure of the vagina (
"its texture is amazing to feel and hold"
) and structural changes in moments of pleasure (
"and the sentry retreats under her hood/as the temple prepares to shudder for good"
).

The climactic moment is mutually beneficial to worshipper and temple, as
"an anointing of pilgrims takes place/the pilgrims are blessed that do not make haste"
. Then, Aiken summed up, the living temple is "made by God to inspire your return".

Dr Kathy Brown opened the post intermission (mercifully brief, as promised) with the jolly
Flintstones
theme, dedicated to all the children over 30. The pianist was accompanied by the trio she is accustomed to playing with and the synergy showed as she led Sattamassagana (sounding more like the introspective Third World version than the reggae praise and worship Abyssinians original) and then shifted the pace easily. The audience roused itself to a cheer, also showing appreciation as drummer and percussionist had a conversation which Brown mediated.

Dr Murphy Osbourne added a wonderful touch of gospel to the night, closing
To God Be The Glory
on a high and his sincerity showing especially on
He'll Do It Again
. Then came the rollicking humour of Dr Lorenzo Gordon in his voice-changing Dr Bing Bang Boo persona, the final stop for men who fail to do prostate check-ups and ignore early signs.

Dr Garth 'Shaka Pow' McDonald informed, "I am the doc", dancing as he deejayed, inviting his dancing pals onstage to drop a couple moves, such as the
Move Them Up
. And Dr Michael Abrahams ended the run of doctors, really taking the house with his review of 2009 (
"LIME and Digicel hafi a fight off Claro" and "West Indies a everybody beating stick"
).
Right Nurse
, his take-off of
Night Nurse
about Edith Allwood-Anderson, hit the spot repeatedly. But Abrahams declared his respect for the Nurses' Association of Jamaica president and dug out his BlackBerry to read
Nurses Plight
for them.

Lloyd Lovindeer's humour, from
Wild Gilbert
through to spraying of the cabinet for chi-chi and termites, as well as a prayerful
IMF
, hit the spot time and again, George Nooks closing his brief set with
God Is Standing By
before the performing doctors put the lid on the night with
We Are The World
.

The cause was not forgotten throughout the entertainment, as many doctors encouraged all to get screened for cancer. The information that the Jamaica Cancer Society screened over 20,000 women, but there are fewer than 400 men in the prostate clinics was sobering. And the Jamaica National Building Society had a strong, welcoming presence in its affable staff members.