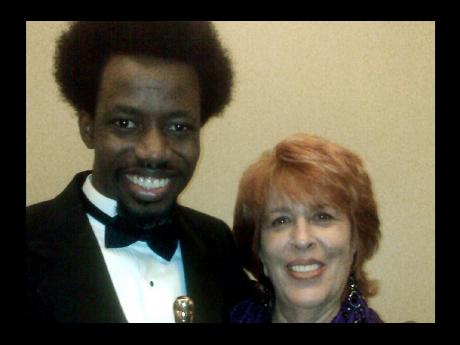 Errol Webber Jr and Music By Prudence producer, Elinor Burkett at the Oscars on Sunday. -Contributed

Jamaican-born Errol Webber Jr is quite elated, having been the cinematographer for Music By Prudence, which won an Oscar award on Sunday.

The documentary won the award for Best Documentary Short at the Academy Awards, which was held at the Kodak Theatre, Hollywood.

After months of putting time and energy into the film, Webber said he was pleased with its success so far.

"I'm very happy about it. We had very high hopes that it would win an Oscar. We believed the message of the film would have an impact on other people as much as it did us," he told
The Gleaner
yesterday.

Music By Prudence is about a group of physically challenged young persons who were housed at the King George VI School and Centre for Children with Physical Disabilities (KG6) in Zimbabwe. The main subject of the film is Prudence Mabhena. Like many physically challenged people in Zimbabwe, she was neglected before being cared for by the institution. In addition to finally finding a 'real' family and home, Mabhena started a band called Liyana with some of the other persons at the school. The band's performance in front of hundreds of people also forms part of the documentary.

The crew, led by producers, Roger Ross Williams and Elinor Burkett, spent a total of six months filming in Zimbabwe and the United States between 2008 and 2009.

With the Oscar win, Webber said even more light will be shone on KG6.

"Even before the Oscar, it drew the attention of various charities. The school does need help and I am glad that the film was able to make strides in doing that for them."

Webber started shooting Music by Prudence two weeks after his graduation from Maryland Institute College of Art in 2008. During the process, he said he spent around 12 hours each day with the subjects as the principal cameraman. He said he was also responsible for getting the crew and gear, as well as getting acquainted with the subjects.

Webber's education began at Greater Grace Temple Basic School and he later attended St Theresa Prep School and Wolmer's Boys' School before migrating to the USA with his family.

In his formative years in Jamaica, Webber said he had a strong interest in aviation, but after touching the video camera for the first time, all hopes of becoming a commercial pilot were dashed.