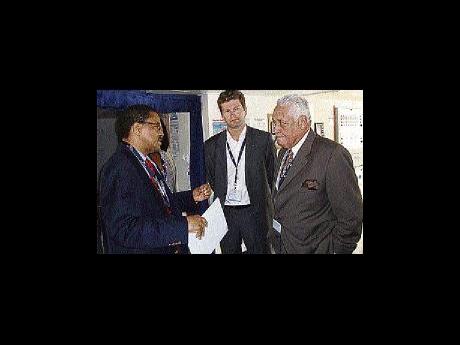 Grantley Stephenson (left), chairman and chief executive officer of Kingston Wharves Limited (KWL) explains a matter of interest to Mike Henry, minister of transport and works (right), while Tore Listad, owners' representative of Höegh Autoliners looks on. The occasion was the welcoming ceremony for the Höegh Caribia and the launch of the Höegh Autoliners transhipment hub at KWL.

The Port Authority of Jamaica, the regulatory body for the island's ports, has announced that the Shipping Association of Jamaica (SAJ) has been appointed the delegated authority under the amended Port Management and Security by-laws, and will on March 15, be the registrar for all trucks that access the ports.

The new Port Management and Security by-laws now cover all trucks transporting cargo to and from the ports. It states that; 'no other person other than an approved trucker shall transport goods or equipment in any port facilities'. The regulations previously excluded truckers transporting goods for import. This role was previously carried out by Jamaica Trade and Invest.

President of the SAJ, Roger Hinds welcomed the appointment and noted that, "this must be seen as part of the process of alignment of all the stakeholders in the port community".

Hinds said the move will add to the security and efficiency of the supply chain, and fits into plans to establish a port community system (also referred to as a Cargo Community System) in Jamaica.

"We have designed and will maintain and monitor a new compliance structure which is intended to foster a better working relationship at the port," Hinds added.