Trying times ahead for JFF 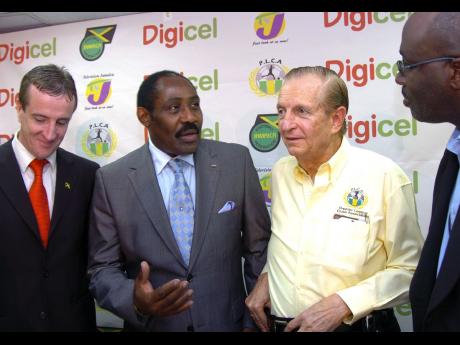 UNLESS financing is provided, Jamaica will not participate in at least three upcoming football competitions run by the sport's world governing body - Federation of International Football Associations (FIFA).

This shocking, yet frank revelation was made by Captain Horace Burrell, president of the sport's ruling body here - the Jamaica Football Federation - following its non-voting congress at St Mary High School, Highgate, on Sunday.

"We discussed the activities of the past 12 months and among the main items that were discussed was the precarious financial situation in which the JFF has found itself. With the current level of funds available it makes it almost impossible to sustain the international programmes," Burrell told
The Gleaner
.

He added: "Based on the current situation the JFF has decided to withdraw from the women's World Cup, the senior women's World Cup tournament, and two upcoming tournaments - the men's Olympic and female Olympic (Under-23) Games tournaments, unless we can get additional funding for our programmes."

Burrell, a FIFA and CONCACAF executive, who is also vice-president of the Caribbean Football Union (CFU), noted that the JFF has nine national teams under its umbrella and only one generates income, the senior men's team.

This, he explained, makes earning money for his organisation strenuous, given the costs to host training camps, as well as other competition-related expenses, mainly travelling and accommodation.

"Having a total of nine national teams to sustain during inter-national competitions is currently untenable and therefore the federation, the general membership of the JFF, has mandated me to meet with the sponsors, Government and other agencies to ask for assistance," he stated.

One such agency is the state-run Sports Development Foundation (SDF), which provides annual subventions to national sporting bodies.

"We are, however, hoping that we'll get some additional support from the Sports Development Foundation, remembering that we have nine national teams, whereas other sporting organisations may have one or three," noted Burrell. "Football has nine in both the male and female categories and therefore we'd be entitled to more assistance than others."

Commenting further, he said: "Of the nine national teams in both the male and female categories, only the senior Reggae Boyz generate income."

Burrell said a measure of their financial situation is mirrored by the federation's inability to pay salaries to some of its staff, including general secretary Horace Reid.

"The situation is made even worse by us not being able to honour the monthly emoluments of some members of staff at the JFF," he pointed out. "In particular, the JFF has been unable to pay the general secretary since November.

"As president I will not allow this current situation to continue. Whatever programmes have to be cut will have to be cut to undertake those various commitments."

Burrell says priority status shall be applied and other teams may also be cut from international competition.

"Congress has agreed that we must compete in all tournaments at the men's national senior level - the Reggae Boyz - as well as the men's Under-17 and Under-20 levels," Burrell emphasised. "We must find the needs to participate in tournaments involving these teams.

"All other engagements are to be reviewed and Jamaica will only participate if those age-group tournaments are sponsored, or we get additional funding," said Burrell. "This is the reality."