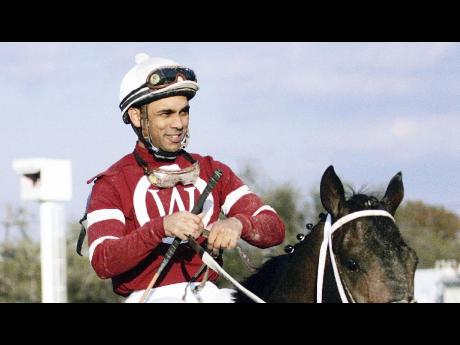 Jamaican Shaun Bridgmohan edged further ahead in the Fair Grounds jockeys' championship race Sunday when he piloted the four-year-old filly Songtress to victory in the eighth race.

It was the only win on the card for Bridgmohan. But his nearest rival, James Graham, failed to ride a winner and the 30-year-old Spanish Town native widened his lead to six wins.

With less than three weeks remaining in the season, Bridgmohan has 64 wins to lead Graham (58) and other contenders John Jacinto (54) and Jamie Theriot (53).

Bridgmohan, who missed Saturday's card because of commitments at Oaklawn Park in Arkansas where he scored two wins, steered Songtress to an easy win in the US$41,000 eighth race over six furlongs for top trainer Steve Asmussen.

He used the 2-to-1 second favourite to stalk the front-running 11-2 bet Retool, quickened to lead approaching the eighth pole and won handsomely by 2-3/4 lengths in one minute, 10.84 seconds.

Retool held on for second and Graham's mount Courante (8-1) was third, a further 2-1/2 lengths behind.

The Fair Grounds season ends on March 28 and Bridgmohan is gunning to add the Fair Grounds crown to other career jockeys' titles he has won at Churchill Downs, Arlington Park, Aqueduct and Calder where he was leading apprentice in 1997.