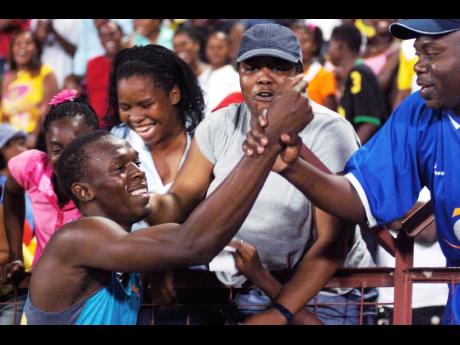 Jamaica's sprint star Usain Bolt (left) greeting his fans in the bleachers after he won the men's 200m in 20.14 seconds at the Jamaica International Invitational meet in 2005. - file

THE Jamaica Amateur Athletic Association (JAAA) is being flooded with requests by athletes looking to participate at this year's Jamaica International Invitational track and field meeting.

The budget for the annual meet had been increased by almost eight million - moving from $54m last year to $61.9m this year; and the cost of ticket prices for the bleachers section of the National Stadium has been slashed by 40 per cent from $500 to $300.

Howard Aris, president of the JAAA disclosed the main details at a press conference at the Hilton Hotel in Kingston yesterday, where updates were given on the event that will take place on Saturday, May 1.

"The phone has been ringing, Donald Quarrie (athletes' liaison officer) and myself have been receiving lots of telephone calls and emails have been coming in," Aris said in reference to athletes seeking a lane at the meet.

He added: "... And when we are looking at the requests we are having so far, the lanes in the men's and women's 100m are just about gone.

"We are trying to see how we are going to put in a special 100m again this year because the demand is so great," added Aris, who is also the chairman of the organising committee for the meet.

Despite noting great interest from athletes seeking to participate, Aris declined announcing names because he said they have not yet signed contracts.

The event will again include the nation's top high schools, who will participate in two relays, the 4x100m and 4x400m, and Aris said they are hoping to improve and put on another outstanding show.

"As we plan in the future, we are going to ensure two things - one, Parking is improved and secondly, it (meet) is more spectator-friendly.

"One of the things we are going to try to do this year, which is a little different, is the entertainment component - music and some activities - and when we sit down as a committee we are going to deal with that," he pointed out.

Monty Tavares, who is in charge of tickets, said the reduction in price is aimed at attracting more spectators.

JAAA treasurer, Ludlow Watts, called for the public and sponsors to come on board and support Jamaica's track and field programme "as the meet serves for the development of the island's athletes".

"Not only are we putting our money where our mouth is as it relates to the Jamaica Invitational meet, but we are committed to sports development in Jamaica," she emphasised.