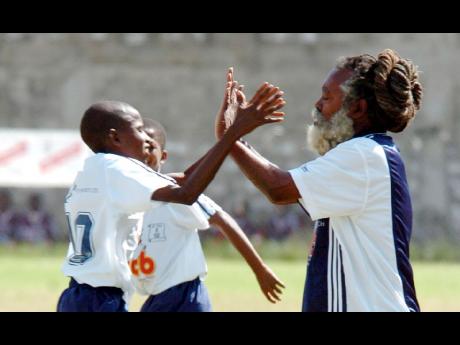 The memories of their long-time coach, Percival 'Itesman' Cordwell, who died less than a year ago, inspired Holy Family Primary School to turn in a classy performance to defeat Denham Town Primary and win the trophy that was named in his honour.

Led by two second-half goals from André McCatty, Holy Family won the game 2-0 to take home the Institute of Sports (INSPORTS)/Percival Cordwell Primary Schools' competition - a title named in recognition of Cordwell, who was highly regarded as one of the unsung heroes of youth football in Jamaica.

The competition was renamed this year following the passing of Cordwell, who guided Holy Family to numerous titles.

The final was played on Monday at the Edward Seaga Sports Complex.

In an emotional atmosphere, the school's principal, Cecile Palmer, switched from the customary classroom devotion on Tuesdays to the schoolyard where the students celebrated.

"Before the game on Monday, we prayed because we wanted to be the first school to win this trophy.

While the game was being played, it was like 'Itesman' himself was there. I understand that, at one stage, the goalkeeper was overheard on the field crying out, 'Itesman help us!'," said Palmer.

She commended the team and stressed that the next step now was to get them focused for the upcoming GSAT examination.

The team's coach, Raphelita 'Karlene' Bonner, who herself was coached by Cordwell in her younger days, dedicated the win to the late coach.

Cordwell, who coached the Rae Town junior and senior football teams for more than three decades, was also the founding coach for Holy Family. He died last April at the Kingston Public Hospital (KPH) after suffering a second heart attack.

"The youngsters held their own, we were undefeated in eight games, we drew one and conceded only one goal. Our goalscorer, McCatty, was scoring his seventh goal in three games," said Bonner, who is now preparing to coach at a higher level.