Heated Warmington walks out of House 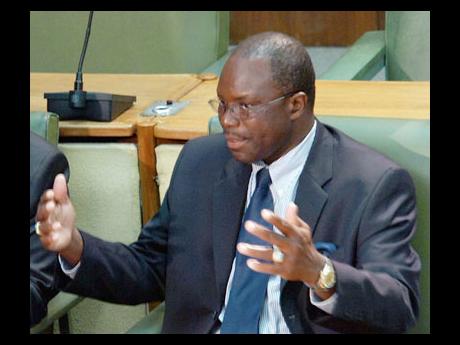 Junior government minister Everald Warmington staged a one-man walk out of Gordon House yesterday after failed attempts to register a nay vote against an Electoral Commission of Jamaica (ECJ) report on the realignment of constituency boundaries.

Warmington, the member of parliament for South West St Catherine, complained that the changes made by the commission in a number of constituencies in St Catherine were in direct contrast to recommendations submitted by the parish boundary advisory committee.

"The position of each member of this House must be observed. I am saying a divide," Warmington declared when Speaker Delroy Chuck put the question to members on whether they accepted the report.

Attempts by House Leader Andrew Holness and other colleagues to calm Warmington failed as he insisted on calling for a divide.

The House leader instructed the Speaker to move to the next issue. At this point, Warmington gathered his documents and exited the chamber.

Earlier, Warmington, minister of state in the Ministry of Water and Housing, accused the ECJ of having its "own axe to grind".

Senior opposition backbencher Dr Peter Phillips cautioned his colleagues against snubbing the ECJ report, saying the House had adopted a convention to accept the recommendations of the commission.

Both political parties have representatives on the ECJ and decisions made by the electoral body are ratified by all its members.

"We accept these decisions unanimously at the commission," Samuda, a member of the ECJ, told Parliament.

He stressed that the commission agreed on a common position before the recommendation was sent to the House.

The report recommends that the number of constituencies be increased from 60 to 63, with one added in St James and two in St Catherine.