The grief they bear 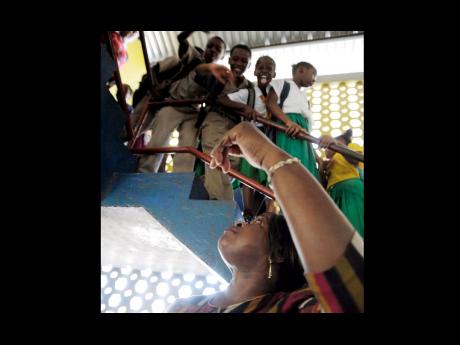 Ula Tapper (foreground), principal of the Tarrant Primary School off Molynes Road in St Andrew, shows the steps from which Akani fell. Looking on are his schoolmates. - Photos by Ricardo Makyn/Staff Photographer 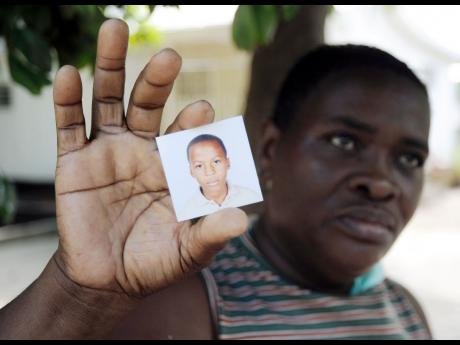 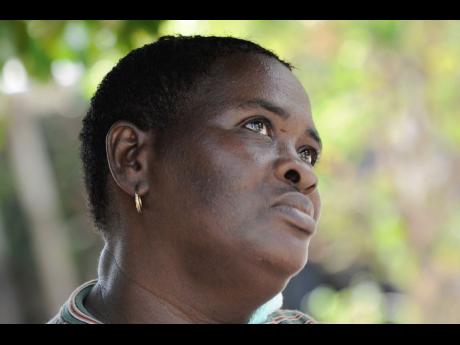 Woman struggles to cope with loss of son

THE HAUNTING wail of a mother who lost her child continues to echo in the heads of her neighbours four days after Ruthlyn Williams received word that her 11-year-old son had died in hospital.

Williams no longer wails, but the tears flow constantly, even as she gets the support of her church and neighbours who are helping her deal with the loss of her son, Akani Lewin. Akani died in the University Hospital of the West Indies 48 hours after he had been admitted following an accident at the Tarrant Primary School off Molynes Road, Kingston 10.

The official report is that shortly before midday last Friday, Akani and friends were trying to jump a gap of more than six feet between the top of a staircase and a neighbouring corridor at the school when he slipped and fell, hitting his head.

Akani was taken to the Bustamante Hospital for Children before being transferred to the University hospital, where he died Sunday night.

"Me was at work about midday on Friday when me get a call from the school that Akani drop from the balcony and was seriously injured and me must rush come," his mother told The Gleaner.

"When ah get there, them tell me say him drop and a little boy take him up and carry him to the class, and him teacher say them should take him to the staffroom where they put him on a bed and use alcohol to rub him up," Williams added.

That is where her hurt gets mixed with anger, as she charges that the school did not do enough to get urgent medical attention for her son, the last of her five children.

"Him did have blood coming through his nose and them call me. Why them never tek the child to hospital and let me meet them there?" lamented Williams.

She added: "When me come to the school about 10 minutes later, him was still in a van waiting, and that is when them tek him to doctor."

But the principal of the school says any delay in getting the youngster to the hospital was based on when the incident was reported to the officials.

"I was not in the staffroom, but I was on the compound, and as soon as I found out, I ran and got the guidance counsellor and she got her vehicle and, with the assistance of a male teacher, we took him to the hospital," Ula Tapper, principal of the school, told The Gleaner.

"It was unfortunate. The teachers, especially his class teacher, are devastated. I have not taken it well, but I know that I have to be strong," Tapper added.

She said his classmates were all shaken and plans are in place to get grief counselling for them.

"Even the high school guidance counselling unit is going to come over," said Tapper.

She said the school has been aware of the danger of the student pranks at the top of the staircase and that teachers have told the children repeatedly not to play there.

"In fact, we have banned the grades one to three from going upstairs, but the fact is that we can't be everywhere every time," Tapper said.

On Margaret Villa Road, where Akani called home, neighbours remember a bright, happy youngster who, on Thursday, was carefree, playing the games that children play.

"I know him from him was a little baby playing in the yard, and when him come from school in the evenings him would come over after him do him homework and ride up and down the yard," one neighbour said with tear-filled eyes as she and others remembered Akani.

Pastor Winston Watson of the Christ Alive Christian Centre is among those offering support and counselling.

"We have just gone through a brief counselling session with her and we will be following up with her other children," Watson told The Gleaner yesterday.