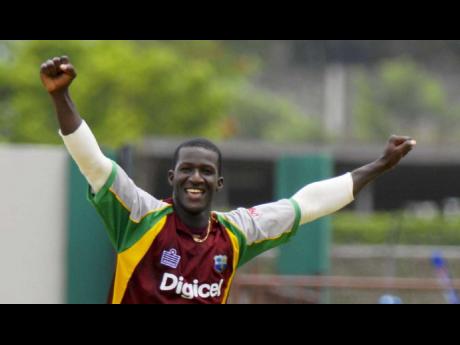 A career-best spell from Darren Sammy carried West Indies to a 141-run victory in the third one-day international (ODI) against Zimbabwe yesterday.

Sammy captured four wickets for 26 runs from 10 overs, as Zimbabwe, chasing 246 for victory from their allocation of 50 overs, were dismissed for 104 in 31.5 overs.

Left-arm spinner Nikita Miller formalised the victory when he had Ray Price caught at short cover for four.

The result gave West Indies a 2-1 lead in the five-match series after Zimbabwe won the first ODI by two runs last Thursday at the Guyana National Stadium, where the home team rebounded last Saturday to take the second ODI by four wickets.

The last two ODIs will be played tomorrow and Sunday at the same venue.

"Hopefully, we can continue and finish off the job on Friday," said Chris Gayle, the West Indies captain.

"This is no time to relax. We have started to show signs of improvement, so we want to continue that and lift the standards even higher. It feels good to win, but this is the beginning. I am sure Zimbabwe will come back hard at us on Friday and we should not get too carried away now," Gayle said.

Zimbabwe's captain Prosper Utseya blamed poor batting for the defeat and declared his team will be fighting back.

"We failed to bat properly. We felt chasing 240 should not have been too much of a challenge, but we just did not bat well," Utseya said.

"The West Indies' bowlers made use of the conditions well. They bowled in the right areas and they deserved to win. We only have a day to sort ourselves out, but it is important that we come back strongly," Utseya added.

Shivnarine Chanderpaul had led consistent batting down the order with 58 from 76 balls to be the rock upon which West Indies built their total of 245 for nine from 50 overs after they were sent in to bat on a hard, true Arnos Vale Sports Complex pitch.

Kemar Roach then made an early breakthrough when he bowled Vusimuzi Sibanda for a duck with the third ball of the Zimbabwe chase. But West Indies were stonewalled when Brendan Taylor joined Hamilton Masakadza and they added 51 for the second wicket.

Sammy then transformed the complexion of the match when he snared three of the next four wickets that sent Zimbabwe crashing to 58 for five in the 14th over.