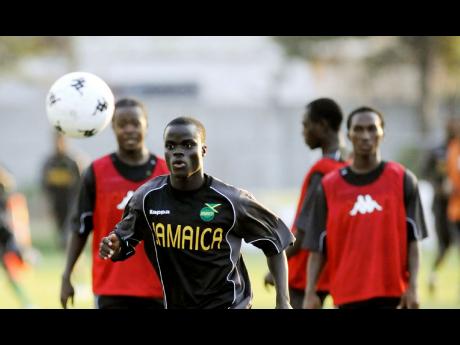 Schoolboy football sensation Marvin Morgan Jr, who left the island on February 16 for a trial with Birmingham City, will not be getting a contract with the English Premier League (EPL) club just now because he does not qualify for a work permit.

However, Morgan may be seconded to a lower division club in Spain to facilitate the process of him qualifying for a work permit.

Morgan has reportedly impressed at Birmingham, scoring three goals in as many matches with the reserve team. But the St George's College midfielder, who represented the Light Blues with distinction in his first Manning Cup season, has not been offered a contract because he will be 18 years old in the next couple of months, which will require him having to do everything for himself.

This includes applying for a work permit, which is impossible at the moment because he has not played any game for Jamaica, outside of the youth level, thus he does not have the required percentage of international caps to qualify.

"The people at Birmingham are very interested to sign me but, with me turning 18 in a couple of months, I would need to have a certain number of international caps," said Morgan.

"So they have come to a decision that they are going to send me to Spain to join a club there until I have played enough matches for my country."

Morgan was called up for the Reggae Boyz training squad ahead of the January 31 meeting with Canada, but did not make the final squad.

Before leaving Jamaica, he was representing Boys' Town in the Digicel Premier League, having made his debut on February 3 against Harbour View.

Morgan who is now in Sheffield, England, where he linked up with Reggae Boy and long-time friend Oniel Thompson, with whom he trains at Barnsley Football Club, was taken aback by the differences at Birmingham.

"It has been nothing like I was expecting, everything is faster, the youths are different from Jamaica, youths," said Morgan. "They are rough, they are fast and they do everything quick, so I had to adjust to that.

"The academy director was impressed with me and I even met with the manager, Alex McLeish, and he said he can't do anything because Jamaica is not ranked at the best position in the world, so he is going to have to take things step by step," he added.