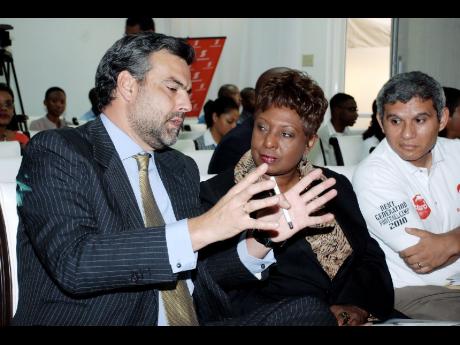 One of the most successful and biggest clubs in Spanish football, Valencia, will be staging it first-ever coaching camp in Jamaica - the first in the Caribbean - for players between the ages of 12 and 18, as well as coaches in Jamaica.

The Next Generation Proballer Easter Football Camp will feature 100 youths and 50 coaches and will run from March 28 to April 1 at Sabina Park. The camp will cater to 100 kids and will be held from 9 a.m. to 1:30 p.m.; and later in the afternoon there will be a coaches camp.

Following a press conference at the Spanish Court Hotel yesterday, Nichole Pandohie, project and communications manager for the Next Generation Proballer Easter Football Camp, explained how the participants will be selected.

"Forty young men will be selected by the Jamaica Football Federation (JFF), along with 15 young women for the JFF women's team," said Pandohie. "Claro has also fully sponsored 10 spots and will be selecting 10 players of their own, while 30 spots will be sold to make some extra money, as well as to open up the pool to players who were not being looked at by JFF.

"It started off as a commercial venture. We were going to sell all the spots in the camp, so it was going to be very expensive as we would have to fly all these people in. We then thought that if we got sponsorship, we could offer most of the spots to high potential kids. So we have been doing a selection process over the last couple of weeks," she added.

Andre Virtue, technical director for the camp, pointed out the rationale behind the camp.

"We are using this as an opportunity to showcase our talent pool to Valencia as a scouting ground and ultimately to build a football academy out here," said Virtue.

"Five coaches will be coming from Valencia to conduct the coaching in the day but we realise that in order for us to really help in the development (of football), we need to coach the coaches. So there will a coaching camp in the afternoon from 3 p.m. to 8 p.m. for coaches who coach youths between the ages of 12 and 18," he added.