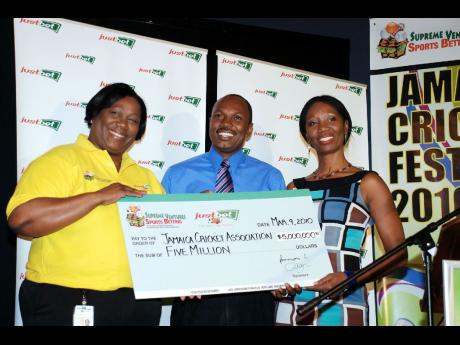 To be sponsored by Supreme Ventures Sports Betting (SVSB) via their JustBet gaming brand, technology firm Intralot Limited, and Digicel, the event, which is being held for the first time, will see the teams competing over a three-week period during next month in a series of one-day internationals, Twenty20 and first-class matches across several of the island's top venues. Those include the Trelawny Multi-purpose Stadium and Sabina Park.

The West Indies, who will use the event to warm up for the third staging of the ICC World Twenty20 championship, which will be held here in the Caribbean starting later next month, will play a total of six matches, Ireland seven, and Canada and Jamaica five.

"It is for us to craft ways to revive, recapture and reinvigorate interest in cricket in Jamaica and, by extension, the West Indies," said JCA president, Paul Campbell, at the event's media launch at the Acropolis Gaming Lounge on Tuesday night.

"This festival represents one of those mechanisms and we hope that it will get the full support of stakeholders who are interested in seeing the game recapture some of its glory days," he added.

The festival, which will see SVSB/JustBet and Intralot sponsoring to the tune of $4 million and $1 million, respectively, will form part of a three-year reciprocal agreement between Cricket Ireland and the JCA.

During this period, the two countries will engage each other in a series of home and away matches, with both associations hoping to attract at least one ICC full member nation, and another ICC associate member during each event.

This year's staging will bowl off during Easter weekend with Jamaica playing Ireland in a first-class three-day fixture at Chedwin Park, and end with the West Indies playing back-to-back Twenty20 internationals against Ireland and Canada on the weekend of April 17 at Sabina Park.

"The Ministry of Sports fully endorses the festival and will sponsor the event to the tune of between $1 million and $2 million dollars," declared Sports Minister Olivia 'Babsy' Grange at the launch, which included presentations from Supreme Ventures' Vice-President Sonia Davidson and new Digicel head of marketing, Donovan White.

JustBet, a fixed-odds betting game, which allows local sports fans to wager on the outcome of sports matches and events, in addition to their sponsorship, will offer betting options on the matches.