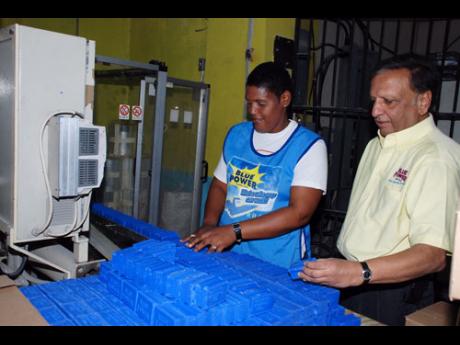 Managing director of Blue Power Limited, Dhiru Tanna, and an unidentified female worker examine bars of soap produced by the company during a tour of the Blue Power plant at Victoria Avenue, Kingston, on Monday. - Colin Hamilton/freelance photographer

Blue Power Limited is reporting an uptick in sales overseas for its proprietory soap products, even as Managing Director Dhiru Tanna hunts for cash to position the company to sell more products abroad.

Tanna is getting ready to float the 10-year-old company on Jamaica's junior stock market in about three weeks, and said he will use the capital raised to build capacity at his Kingston plant.

Blue Power is a subsidiary of Lumber Depot, a retailer of building material located in Papine, St Andrew, whose directors are Tanna, Kenneth Benjamin, Anthony Hart, and Peter Millingen.

Tanna, during a tour of his operations on Monday, said sales for Lumber Depot at year ending April 30, 2009 reached $550 million, with inventory valued at about $50 million, while group sales rose to $647.8 million, placing Blue Power's top line income at under $100 million.

Lumber Depot operates from a property owned by its subsidiary Cotrade Limited.

The group also comprises Papine Properties Limited, which is registered in the British Virgin Island as a holding company for Cotrade Limited.

Neither Cotrade nor Papine Properties does any trading.

Blue Power's export sales are less than a fifth of gross revenue, reported at 17 per cent at April 2009.

But six months later, up to October 2009, cross-border sales grew to 30 per cent of total revenue, the company said.

And the company is reporting that soap sales are now averaging $10 million-$12 million per month, or an annualised $120 million-$144 million per year.

He is also expecting that Carbolic will constitute about 20 per cent of overall sales this year.

A new cocoa butter offering called Taya has been on local shelves for the past two weeks "to test the waters".

Blue Power faces competition mainly from Colgate-Palmolive in the Dominican Republic, and Dialan, made in Turkey.

However, Tanna is of the view that his company can make inroads into the domestic market, even as he seeks out new customers overseas.

"Growth prospects are relatively unlimited, as the bathing soap market in Jamaica is very large, and served mostly by imports," he said during the factory tour Monday, co-hosted by Mayberry Investments Limited, lead broker of the initial public offering.

Blue Power is contracted to a number of companies to manu-facture products for the domestic market, such as Big Blue for GraceKennedy; Lascare for Lasco Distributors; Balco Caribbean's Tops; Blast for HD Hopwood; Prestige for Payless Distributors and Cari-Med's Magic.

The company is said to produce about 120,000 cases of soap per year and Tanna is hoping to double volume in two years.

The company recently landed a deal with Lasco Distributors to produce bathing soap under the LASCO brand, with five fragrances Olive Oil, Aloe Vera, Cocoa Butter, Deodorant and Carbolic expected to be on shelves by June.

Blue Power began manu-facturing on a small scale at the turn of the last decade. The first two years were shaky, the company admits.

But now, well-established and with a desire to expand, Tanna, in the past two years, has been investing in equipment that includes a mixer, rolling mill, and cutting, stamping and wrapping machines.

The company has little debt, which its owner says augurs well for its listing.

Existing shareholders and directors have agreed, as part of the public offering, that all advances and loans to Blue Power be converted into equity at the same price per share open to the wider market, Tanna said.