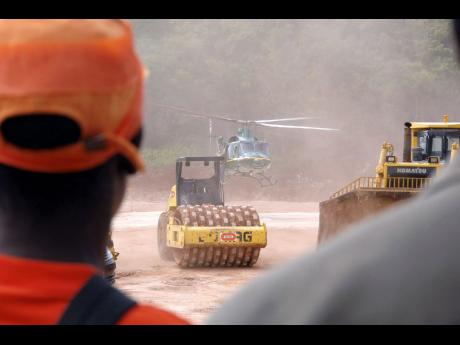 Persons watch as the helicopter carrying then Prime Minister Portia Simpson Miller lands on the site for the groundbreaking ceremony for the Mount Rosser Bypass at Schwallenburgh in St Ann. The project is now facing its second delay because of geotechnical problems. - photo by Ian Allen

NEW PROBLEMS have surfaced on the controversial Mount Rosser leg of the Highway 2000 network, which is set to open in August, just months after the Government was forced to fork out an additional US$27 million to address technical difficulties that had emerged.

However, the Golding administration will not have to pick up the tab to correct the latest concern, based on an agreement reached with Bouygues Travaux Publics/ TransJamaican Highway following the previous problem.

"I have been advised that there are further geotechnical developments that may delay the project even further," Minister of Transport and Works Mike Henry told The Gleaner on the weekend, "but I am awaiting the official report before I can state the extent of the problem."

Henry added: "Luckily, the people of Jamaica will not have to stand this cost, as we were able to put in new terms in the contract that any future geotechnical problems would be the contractor's cost."

The extent of the delay to the August timeline is not clear.

The 25-kilometre, four-lane dual carriageway, which stretches from Linstead, St Catherine, to just outside Moneague, St Ann, had an initial price tag of US$94 million, which was expected to cover land acquisition, road construction, the building of a toll plaza and the installation of utilities, over a 30-month period.

The project was developed after four different studies over a 40-year period, namely Goodkind and O'Dea in 1968, Lavallin in 1972, Ingeroute in 1996 and Dessau Soprin for Highway 2000. The 1996 Ingeroute study was selected as the best of the lot, taking into account costs and traffic.

However, areas of weak and unstable soil were discovered during construction, resulting in a jump in the overall cost to US$126.5 million, with the overrun blamed on inadequate geotechnical work in the preparatory stage.

Ironically, Linstead, where the bypass begins, is located in the constituency of former Minister of Housing, Water, Transport and Works Robert Pickersgill, under whose watch the project began just two months before his party was ousted from government.

The decision to start the Linstead to Moneague leg, which is the mid- section of the toll-road project between Ocho Rios and Spanish Town, as an independent project, has sparked concerns. However, efforts to contact the former minister for a comment have been unsuccessful.

The Development Bank of China and the PetroCaribe Fund were among those targeted for the additional financing, which is to be repaid from toll fees collected on the Mount Rosser segment of the highway.

French construction company Bouygues Travaux, owner of TransJamaican Highway, could not be reached for a comment.