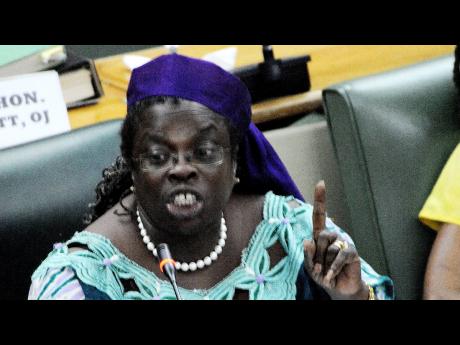 Beverly Miller, a member of the Jamaica Rastafarian Development Community in Ethiopia, makes a presentation yesterday to a joint select committee of Parliament deliberating on issues affecting Jamaicans in the East African country. - Ian Allen/Photographer

A GROUP of Rastafarians living in Shashemene, Ethiopia, yesterday asked a Diaspora Affairs Committee of Parliament for assistance in lobbying the Government to urgently establish an embassy in the East African country to provide greater representation for Jamaicans residing there.

In a submission to the joint select committee reviewing diaspora affairs yesterday in Gordon House, members of the Jamaica Rastafarian Development Community (JRDC) made a case for Jamaican diplomatic presence in Ethiopia.

The JRDC argued that although there was a Jamaican honorary consul represented by an Ethiopian in that country, there was inadequate Jamaican consular and diplomatic presence in the capital, Addis Ababa.

Beverly Miller, a representative of the JRDC, told the committee that the largest group of Jamaicans in Africa now live in Ethiopia. At present, some 500 Jamaicans live in Shashemene. Miller said the more than 200 children born to Jamaican settlers in Ethiopia could not access certain services reserved for Ethiopian citizens.

"The Jamaica Government could use its diplomatic channels, influence and good standing in Ethiopia to negotiate our status on our behalf," Miller said.

The JRDC also sent a letter to Prime Minister Bruce Golding inviting him to visit Shashemene, the Jamaican community in Ethiopia.

Committee member and former foreign affairs minister under the People's National Party government, Anthony Hylton, supported the JRDC's call for the setting up of an embassy in Ethiopia.

"I was the one that opened the mission in South Africa and we believe that we should be represented in much larger ways in Africa and certainly Ethiopia," he said.

Broadening the discussion on Jamaica-Africa relations, Professor Neville Ying of the Jamaica Diaspora Institute told the committee that the idea of an exchange programme between Kenya and Jamaica was alive and well. He said the sharing of expertise in long-distance running and sprint events was still being pursued by both countries.

"This is being seriously pursued by the Olympic association and the JAAA (Jamaica Amateur Athletic Association). I would suggest that we use sports and cultural exchanges as starting points to solve some of these issues," he said.

However, in his comments, committee member Navel Clarke raised concerns about the Government's ability to identify financial resources to set up an embassy in Ethiopia at this time.