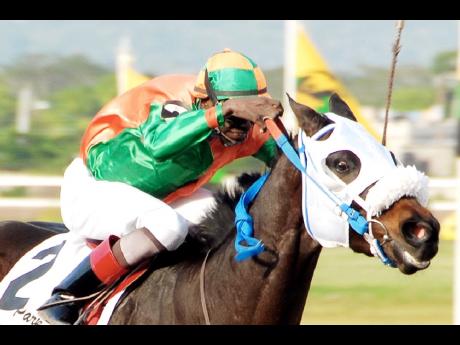 Crack apprentice Doushane Gordon winning the seventh race over 1000 metres round aboard FOREVER MINE at Caymanas Park on March 6. The Neive Graham-trained five-year-old gelding covered the distance in a smart 59.1 seconds. - Colin Hamilton/Freelance Photographer

The newly formed Jamaica Jockeys Agents' Association is now functional, having been ratified by the Jamaica Racing Commission on Monday.

Top agent Donovan Wilson has been elected its first president and will serve for two years.

Wilson, who has represented many riders including Brian Harding, Ramon Parish and Trevor Simpson since he started in the business 12 years ago, was elected to the post late last year.

However, the process of ratification took some time and was finally settled at a meeting with representatives of the Jamaica Racing Commission this week.

Others elected to the executive of the association are Howard 'Howie' Campbell (vice-president), Violet McKenzie (secretary) and Bev Harding (treasurer).