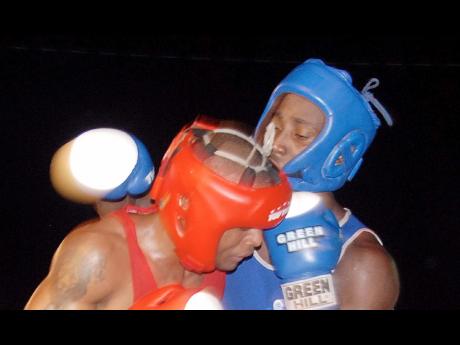 Mullings, who is regarded as one of the best welterweight fighters in the country, recorded a technical knockout victory over Gordon, who hails from the Stanley Couch gym, in the second round of a four-round contest at the Barbican Beach complex on February 27.

"I just want to continue on this winning streak and to give my supporters a great fight," said Mullings. "This fight is a stepping stone for me to challenge for the Jamaican welterweight by the end of the year," he added.

Glenroy Beckford of Hard Knocks Gym and Ian 'Hagler' Smith of the Stanley Couch Gym are two of the country's leading welterweights, and Mullings will likely face one of these boxers in his quest to become the country's top welterweight.

The 27-year-old Mullings, who hails from Bruising Gym in Stony Hill, added that he was very deligh-ted with the way he executed his fight, as he took control of the bout from the opening bell.

"I feel really good because the outcome of the fight was what we expected, and I couldn't really ask for anything more," said the fighter who grew up in the United States.

"I think that I really gave the supporters good value for their money and I can assure them that every time that I step into the ring I am going to give a good account of myself," said Mullings, who holds a bachelor's degree in finance from the University of New Paul in New York.

According to the Jamaican fighter, he aims to become the world welterweight champion and he is on track to achieve his goal.

"I think that pound for pound I am one of the best fighters out there now," said Mullings.

He also disclosed that he was now in negotiations to fight Anthony Osbourne on April 3.