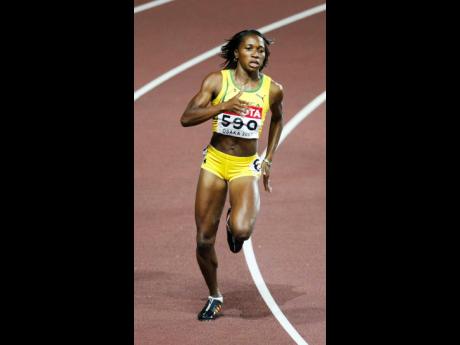 Williams-Mills and Guyana's 2002 Commonwealth Games champion, Pompey (52.29), were second and third, respectively, behind Firova. Bahamian Christine Amertil (52.36) was fourth and failed to advance.

Williams-Mills is going for a medal and to better her personal best of 51.25.

Making it to the finals

"I wanted to make it to the final so I just kept going ... hopefully, I can get a PB in the final," she said.

Jamaica-born American Debbie Dunn won the second semi-final in 52.08 seconds ahead of Bulgarian Vania Stambolova (52.30), while Jamaican Bobby-Gaye Wilkins was ousted with a fifth-place finish in 52.58.

In the earlier first heat, Caribbean entries Edino Steele (Jamaica) and Michael Mathieu (Bahamas) were eliminated after failing to make the top three. Steele (46.84) and Mathieu (47.09) were fourth and fifth, respectively, behind American winner Bershawn Jackson (46.13).

Led by the in-form US Virgin Islands sprint ace LaVerne Jones-Ferrette, Caribbean athletes showed themselves as solid medal candidates in the 60-metre sprints.

Encouraged by her effort, Jones-Ferrette is taking aim at another sub-seven clocking.

"I would describe my race as controlled. I definitely feel in me a sub-seven (second) time," said Jones-Ferrette, who clocked her 2010 world best in Stuttgart earlier this year at 6.97, the fastest time for the event in 11 years.

Virgil Hodge, of St Kitts and Nevis, was the only Caribbean entry ousted in the women's 60-metre sprints, placing sixth in 7.61 seconds in the last heat, won by American Carmelita Jeter (7.30).

Bailey, the current Caribbean leader in the event, captured heat seven in 6.70 seconds and Mariano sped to a 6.66 victory in the third heat.

Bahamian Rodney Green (6.73), Jamaican Nesta Carter (6.69) and Netherlands Antilles' Churandy Martina (6.77) booked spots in the next round, but Jamaican Lerone Clarke (6.78) and St Vincent and The Grenadines' Jared Lewis (7.06) were eliminated.

Britain's Dwain Chambers was fastest of the round at 6.59 seconds.

Robles, the outdoor world record holder in sprint hurdling, stopped the clock at 7.74 seconds to win his heat.

The quickest of the session

Bahamian Shamar Sands, Jamaican Maurice Wignall and Ronald Forbes, of the Cayman Islands, joined Robles in the next round, while Americans Terrence Trammell (7.60) and David Oliver (7.60) were the quickest of the session.

Wignall (7.71) was runner-up in his heat and Sands (7.75) was second to world-leader Trammell in heat two, in which Jamaican Dwight Thomas scratched.

Forbes (7.86) was fifth in his heat but advanced as one of the fastest of the losers.

China's Liu Xiang, on the comeback trail from injury, stepped into the next round with a 7.79 clocking for third in heat three.

Among the women, Jamaican Lacena Golding-Clarke was second in heat three to advance with an 8.02 clocking and her teammate Vonette Dixon (8.04) also picked up a runner-up finish in heat four.

Canada's Priscilla Lopes-Schliep (7.94) posted the fastest time in landing heat three ahead of Golding-Clarke and American LoLo Jones (7.95) was a fast winner of heat four over Dixon.