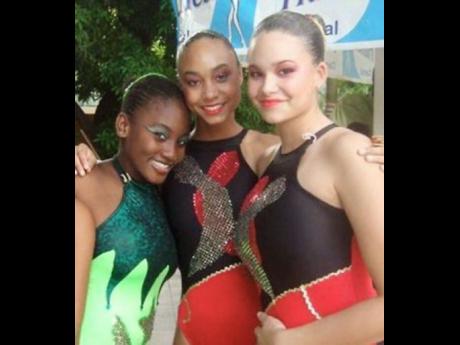 They hope to qualify for the Jamaica national team to the Carifta Games to be held in Kingston on the Easter weekend in April. Later this year, they also hope to be selected to the national team for the Caribbean Island Swimming Championships) (CISC) to be held in Cuba at the end of June.

Swimmers in the 12 and under category, as well as 13-15 and 16-18, performed their figures and routines to music. The routines were judged on technical as well as artistic merit. This will be added to the score for figures and an average combined score obtained. Synchro swimmers from Jamaica, Aruba, Netherlands Antilles and Guadeloupe are expected to compete in the Carifta Games this year. Swimmers will compete in solo, duets and team categories.

Those who hope to qualify from the club are senior swimmers who recently won the Prime Minister's Award for excellence in sports. They are Tashna Smith Edwards, Michelle-Ann Gabbadon and Shannon March, who compete in the 16 to 18 age group and have been in the sport for five to seven years.

Among the challenges in synchronised swimming, as with any sport, is the lack of funding for overseas meets as well as equipment, gear and fees.

As the first synchronised swimming club, which was started in 1998 by Kathy Lim Sang, Island Aquatics has taken a number of initiatives in this regard, including fund-raising activities and synchro shows.

One such show will be held at the Hilton poolside tomorrow afternoon to raise awareness of the sport as well as to raise funds for the upcoming meets.

Synchronised swimming is a hybrid of swimming, dance and gymnastics and requires advanced water skills and exceptional breath control under water. A 120lb synchronised swimmer can burn 218 calories every half hour. The sport requires great strength, endurance, flexibility, grace, artistry and precise timing.