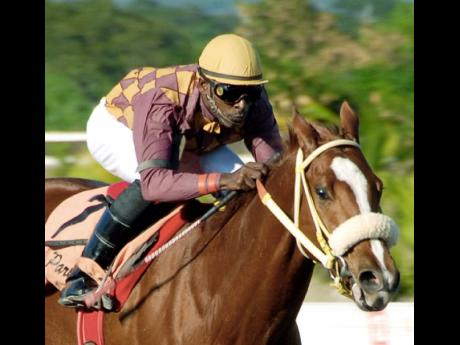 The Guineas trials are on at Caymanas Park today with a maximum field of 16 down to contest the $1.3 million Thornbird Stakes for three-year-old fillies; and the colts take the field for the Prince Consort Stakes, both over 1400 metres.

Among the 16 starters for the Thornbird Stakes are AL FOUZIA, voted the champion two-year-old filly of last season, and EXCELLENCE, who flopped as the 1-2 favourite in the Hot Line Stakes over 1200 metres on February 20 when hindered in the early stages and ending up 53/4 lengths fifth.

Both fillies should carry the bulk of the betting and although others such as REGAL SENSATION, SOCA PARTY, GABIWITZO and the improving maiden MERIT'S BRITE LITE have worked well and will have some support, it should come down to the Rowan Mathie-trained AL FOUZIA and EXCELLENCE from the stables of champion trainer Wayne DaCosta.

The big question is whether top-weight AL FOUZIA (Dane Nelson up) can successfully allow 6.0kg to the lightly weighted EXCELLENCE under champion jockey Omar Walker. While I envisage a close race between the two at these weights, preference is for AL FOUZIA, who represents the class horse of the field.

Although out for the first time since finishing third to COLONEL WALES in the prestigious Supreme Ventures Jamaica 2-Y-O Stakes over 1600 metres last Boxing Day, AL FOUZIA has looked sharp in her preparation, galloping five furlongs in a brisk 1:01.1 last Saturday morning and 1:15.0 easily on February 28.

Last season, she won three consecutive races as a two-year-old, including the valuable Cash Pot Only One For Me Trophy over 1200 metres on October 17.

The bay filly by Legal Process out of the Liver Stand mare Lady Bakul seems to have trained on from two to three, and while EXCELLENCE should prove tough at the weights, her proven class should see her through.

In contrast, the Prince Consort Stakes has attracted seven starters and things are a lot more straightforward in so far as the winner is concerned. It will take a brave punter to oppose the exciting prospect LIFEISJUSFORLIVING, who is unbeaten in two starts.

Trained by Wayne DaCosta, the chestnut gelding by Region Of Merit out of Bold Queen is coming off an impressive fast-time victory over KRYPTOGRAM in the Sir Howard Stakes at 1200 metres on February 20 and is definitely going places. Indeed, should LIFEISJUSFORLIVING turn in another impressive performance today, he could well start favourite for the 2000 Guineas.

With his preparation complete, LIFEISJUSFORLIVING, with Walker again in the saddle, looks hard to oppose with only 53.0kg.

Other firm fancies on the 10-race programme are top 2000 Guineas contender COLONEL WALES ahead of THE GUV in the third race over 1400 metres; MEDUSA in the fourth; MISS LEE in the sixth; MAGNIFICO in the eighth; and ESTO PERPETUA over RIP CURRENT in the 10th.