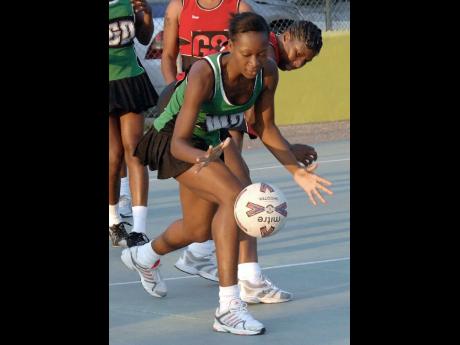 Jamalco's Kerry-Gaye Brown prepares to catch the ball ahead of the Police 'A' Rhoda Moulton, during their JNA/Berger Paints Super League game at the Leila Robinson Courts last Saturday. Jamalco won 81-32. - Ian Allen/Photographer

Defending champions Jamalco, along with Waulgrovians 'A' and Tivoli Gardens 'A', go in search of their third consecutive victory in the Jamaica Netball Association (JNA)/Berger Paints Super League competition at the Leila Robinson Courts today.

Jamalco, who are seeking their eighth straight hold on the trophy, will oppose Tivoli 'B' at 5:50 p.m. The Winston Nevers coached-Jamalco recorded their second consecutive win on Thursday, with a 51-21 victory over Arnett Gardens 'A'.

Former national players Elaine Davis and Marsh Murphy, who scored 29 and 24 goals, respectively, against Arnett Gardens, along with current national players, Nadine Bryan, Sasher-Gaye Henry and Nicole Aiken, will lead their team's charge for a victory.

However, despite the strength and experience of his team, Nevers said they will not be taking their opponents lightly.

"We are going out there to play attacking netball because we know that Tivoli are one of the giant killers in this competition and they always play their best games against the big teams," said Nevers.

Waulgrovians 'A', still smarting from this year's Open League success, will challenge newcomers G.C. Foster Strikers 'A' at 7 p.m. The Marvette Anderson-coached Waulgrovians also won their second match of the season, with a comfortable 73-19 victory over Skibo 'A' on Thursday.

Anderson said: "It should be a good game because they are a good team, but we are pretty confident of the victory."

National player Janielle Fowler, who scored 64 goals from 74 tries against Skibo 'A', along with Simone Forbes and Christina Solmon, will lead Waulgrovians attempt for a victory.

G.C. Foster will be depending heavily on national player Crystal Gordon, along with Samantha Martin and Ceffelon Fraser.

Meanwhile, Tivoli Gardens 'A' will entertain newcomers Mico at 7 p.m. The west-Kingston based team, defeated sister-team Tivoli 'B' 43-23 to record their second win of the season.

The Sylvester Campbell-coached team will rest their hopes in the hands of former national representatives Cleopatra Grant and Oberon Pitterson, and Jodi-Ann Kentish.

Campbell said: "It should be a good game because Mico is an upcoming team and they have been playing well, so it should a competitive game."

Mico, who won their first game on Thursday by beating G.C. Foster Strikers, will be banking on national player Vanessa Walker and Sharna Carridice to deliver high-class performances if they are to win.

In the day's opening games at 4:45 p.m., Arnett Gardens 'A' will oppose Windalco and Police await Skibo 'A'.