Eltham, Innswood to clash in final 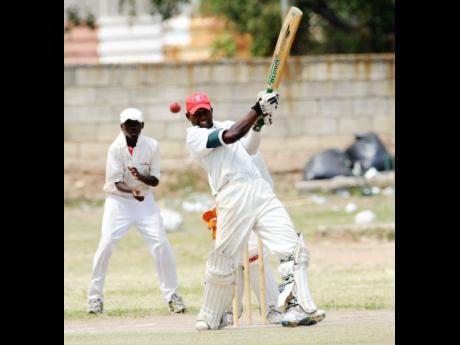 Excelsior High's Odane Hartley on the attack as Tarrant's Laurence Beckford looks on at slip, during ISSA/Grace Shield Premier League semi-final round action at Excelsior yesterday. Excelsior won outright but failed to advance to the final. Hartley top-scored with 37 as Excelsior scored 152 for nine in their second innings. - Ricardo Makyn/Staff Photographer

The final will be held next Wednesday, Thursday and Friday at Melbourne Oval.

Eltham, who will be seeking their sixth straight hold on the title, defeated Norman Manley by an innings and 41 runs; while Innswood got the better of Wolmer's on first innings following their drawn encounter.

Eltham topped section one of the semi-final groups on 10 points, the same as second-place St Catherine who, despite defeating Meadowbrook by an innings and 20 runs at St John's Road, failed to advance by virtue of losing the head-to-head tie between both teams. Norman Manley ended on three points and Meadowbrook two.

Innswood topped section two on 11 points, six more than Excelsior, who defeated Tarrant outright by 184 runs at Courtney Walsh Oval, in what was a game of academic interest only. Wolmer's, five, and Tarrant, zero, round off the group.

Innswood, after resuming on 260-1 overnight in response to Wolmer's first innings total of 109, piled up a massive 730-8 declared.

"Words are inadequate to describe how the team is playing. Our batsmen and bowlers continue to be consistent," said a delightful-sounding Kirk Gordon, coach of the Old Harbour Road-based Innswood. "After losing last year, our plan from the first training session this season was to go one step further, and so far, so good," he added.

At Eltham, the home team, after bowling out Norman Manley for 77 in their first innings on day one, returned to dismiss the visitors for 88 in their second innings on yesterday's second and final day.

Omar Crighton, three for six, and Joseph Dennie, three for 23, were Eltham's top bowlers, while DeAndre Lee, 33 not out, made most runs for Norman Maley.

Eltham, in their only turn at bat, made 206 with Jevon Innis getting 50 not out and Oshani Ricketts 33 against Kerron Edwards, three for 48.