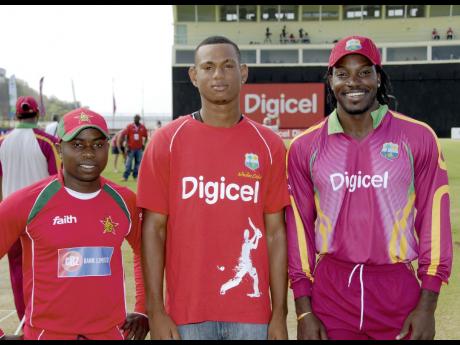 As soon as commentator Tony Cozier laid eyes on Gabriel Kirby, he told him he really should be in West Indies gear and bowling fast.

The 18-year-old is a strapping 6 feet 4 inches tall with much more to grow, and Cozier must have instantly recollected Joel Garner - the legendary towering Windies pacer and now team manager - in his youthful days. Kirby met Cozier prior to representing Digicel at the toss ceremony to commence the fourth Digicel one-day international at the Arnos Vale Sports Complex in St Vincent.

"Just look at him," Cozier said. "I don't have to tell you, he's a fast bowler and an aggressive fast bowler at that," Cozier remarked on television just before Kirby handed the coin to Windies captain, Chris Gayle.

For the first time in the Digicel Series, the Windies captain won the toss and he invited his opposite number - Prosper Utseya - to bat first.

Kirby - who is as tall as Gayle - is not your typical fast bowler though; he plays the piano and has performed in Trinidad and at seve-ral events in St Vincent. He attends community college and has a deep interest in the sciences, so if his fast bowling career does not work out you could see him banging away at a piano or in a lab somewhere.

Kirby said the experience of representing Digicel at the toss was phenomenal.

"It was a dream come true to stand in the presence of Chris Gayle, who is a major player in world cricket," the eloquent right arm fast bowler related afterwards.

"Gayle is an inspiration to me because of his cool character and the comfort with which he carries out his duties, and the whole experience was encouraging because it made me feel like I could be there some day," said Kirby, who aspires to one day play for the regional senior team.

He has made it on to the reserve list for the St Vincent Under-15 and Under-19 and plays his cricket with the Neil Williams Cricket Academy.