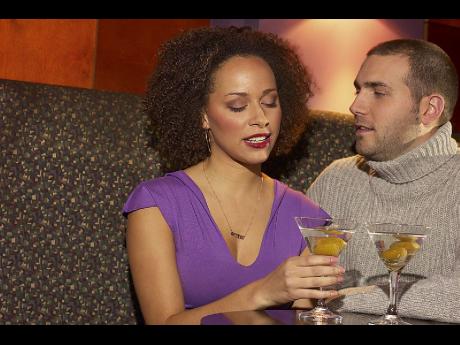 Eve was in a bad situation. She didn't believe in things like fate or serendipity. But how was it that on only her third week back in Kingston, she managed to end up seated across from her ex, the one person she had tried to avoid for the last eight months? She gulped down some of the lukewarm water the waiter had poured into her glass and looked around anxiously. She thought she had done everything to ensure she avoided this exact situation. Immediately after the break-up, she had flown off to Missouri to stay with her grandmother, in a small town where there was no chance of running into anyone she knew. She had returned to Jamaica only after hearing that her ex had moved away himself, to Florida. And still feeling wary, she had arranged to meet Roger in this sweltering, tiny restaurant, the kind of place her ex wouldn't be caught dead in.

Yet here they were, inexplicably thrown together once again. He hadn't caught sight of her yet, she didn't think. He was with two other guys and a pretty, if slightly skanky-looking, girl, who kept leaning towards him and giggling. Of course, he looked even better than the last time she had seen him. He was wearing jeans and a T-shirt with a blazer, instead of the usual business suit, and his beard had grown out a little, giving him a kind of rugged look. In a way, the scruffiness looked good on the sharp angles of his boyish, almost delicate features. His lips were fixed in that same poutish look that she used to find so adorable. The girl leaned over again and started running her fingers through the hair at the back of his neck. Eve felt sick.

Roger made a small sound in the back of his throat and she snapped her attention back to him. He gave her an eager smile and then coughed twice, wiping his hands on the front of his shirt. Eve stared at him and wondered what she was doing on a third lunch date with this guy. She shook her head sadly. That very morning Roger had seemed perfectly acceptable. He was a little awkward socially, sure, and he told one too many corny jokes, but he was a perfectly nice man, not bad-looking either. At least that's how he had seemed before. Now her ex had stepped back into the picture and ruined it. She couldn't help herself, every man paled in comparison to him.

She glanced over at his table once again and, with shock, she saw that he was looking right at her. As their eyes met, she could have sworn the pressure in the room dropped. It felt like her ears had popped. Her skin tingled and her breath became shallow. Eve couldn't believe she still had this reaction to him. She looked down at the cheap plastic tablecloth, and tried to breathe normally.

Unfortunately, Roger must have noticed her reaction because he looked behind him, in the most obvious way possible. "You see somebody you know?" he asked. Eve decided to go for complete honesty, why not?

"My ex," she said. Roger's jaw dropped and he looked behind him again, his eyes goggling at the other table. Eve sighed. She risked another glance and saw that her ex was still looking at her, this time with a trace of amusement playing across his lips.

"Please, turn around," she said. Roger gave a nervous laugh and turned to face her. "So, you not going say hi?"

"No," she replied shortly.

Roger nodded as if he understood. "What's his name?"

Roger stared at her for a moment before letting loose a guffaw. "Adam and Eve?" he exclaimed.

"Keep your voice down," Eve begged.

Roger stifled a chuckle and picked up the menu. She began to wish she had brought her lunch to work.

As Roger loudly debated the pros and cons of having steamed fish for lunch, she couldn't resist taking another peek at Adam's table. She was disconcerted to find that not only was he still looking at her, but his skanky sidekick was now glancing over as well, her eyes full of suspicion. Eve hoped she knew what she was getting herself into. Strong, stubborn and passionate, Adam was often like a ticking bomb waiting to go off. He and Eve were too similar to be compatible. Neither of them liked to give in and they often fought for days at a time, hurling curses and accusations at each other until someone finally surrendered. Sometimes in the middle of an argument, his eyes would light up with a sudden, inexplicable desire, and he would grab her and kiss her ferociously, like a scene from a cheesy black-and-white film. And, even as her indignance rose and she tried to push him away, Eve's own desire would grow to match his and they would make love with an intensity that threatened to eclipse them both.

The skanky girl shot her one more look and then leaned over to kiss Adam right on the lips, one arm slithering around his neck and pulling him closer. Eve had had enough. She pushed back her chair, and muttered some story about being ill to the surprised Roger. She grabbed her bag and walked out quickly, leaving him sputtering in disappointment. She didn't bother to look back at Adam's table.

She took a long and winding way back to work, slipping through the crowds of people going to lunch, half-hoping he didn't try to follow her, half-hoping he would. She didn't even feel like crying, all her tears for Adam had been used up long ago. She just felt tired and sad.

She turned the corner towards her office building, only to find him standing by the front doors. Of course, she thought. As she walked toward him, she noticed that he actually had the nerve to look angry. She considered just walking past him but he would probably follow her.

"What do you want?" she asked.

He worked his jaw and stared at her for a moment. "Who was that guy?" he asked.

Eve laughed. "You cyan be serious. Please move out of my way so I can get back to work."

She made as if to step around him and his hand shot out and held on to hers, surprisingly gently. He lowered his voice. "Tell them you sick or something. Let's go somewhere and talk."

"Don't you think your girlfriend would have a problem with that?"

He shook his head impatiently. "I barely know her. Eve, you know how long I been trying to reach you?"

His voice took on a plaintive note, and, to her dismay, Eve felt the prick of hot tears beginning to flood her eyes.

"Well, you seem to be doing fine without me." She tried to shrug off his hand, but he held on tight.

He lowered his head and whispered, "Come with me."

She shook her head.

He pulled her even closer. "We're still married, Eve. Please."

He raised his other hand to her cheek, touching it lightly. His eyes bored into hers and he moved closer. She felt her body beginning to respond to him, even while her mind churned with emotion.

When she finally spoke, her voice was so soft it could barely be heard above the sounds of traffic around them.