On development and losing elections 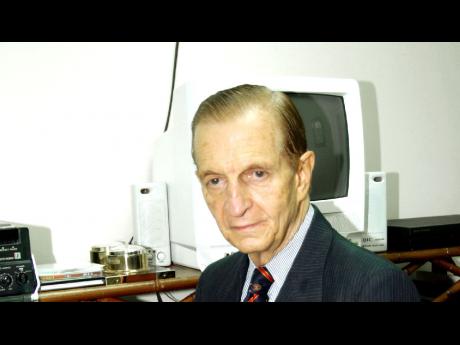 This is the conclusion of Laura Tanna's interview with former Prime Minister Edward Seaga.

On January 7, 2010, I took advantage of the upcoming publication of Edward Seaga's autobiography to ask him about his life and life's work now that he has had time to reflect upon it during the last five years. At the end of the interview, I asked: "Is there anything else you would want to say that you feel you haven't said somewhere else already?" His response might surprise you:

"Since I have departed from the world of politics, I've found a new form of inner peace that allows me to think more clearly and to think with a sort of equanimity that enables me to see things, in many instances, differently, and to be a far more balanced person, and for my thoughts to be much more sharp. I have grown substantially since I left politics, in a different way, but it is to my liking because, looking back into the political system, I can't discredit it, because it gave me 45 years of opportunity to do a lot of things that I consider to have been important. But, to me, it does not offer me the kind of satisfaction anymore that I had in it, in winning elections and things like that because, unless winning an election serves a purpose of a development nature, it is hardly worth winning. There's no use winning it and you take two steps forward and the next time somebody else wins and they take two steps backward. You end up being in the same place you were in the beginning and that is what has happened to Jamaica. That is why other countries that were on par with us have moved far ahead. All the English-speaking Caribbean countries have moved far ahead of us because we keep going forward and backward. That is not something that can continue because, if it does, it's going to leave us in a state of stagnation that, at some point in time, is going to have results that are disastrous."

Many today would agree with his assessment. Certainly his clarity of thought and expression has never been sharper, despite his 80 years of age, come May 2010. Seaga set to work, rebuilding the country's economy as soon as he won the 1980 election, because of the economic deterioration of the 1970s' pursuit of socialism. He rebuilt Jamaica again after hurricane Gilbert in 1988. So how did it feel to lose the 1989 election? He pointed out:

"I had to rebuild Jamaica three times. The first was to rebuild it from the devastation of the 1970s, but we didn't get too far in that rebuilding process when we were hit with the recession, which was at that time called the worst world recession since the Great Depression of 1929. That started in the late '70s in the United States but it didn't hit us until 1982. That's when the bauxite industry here almost closed down completely and, as a result, since this was our main foreign exchange earner and a substantial revenue earner, the economy almost collapsed. I had to go out and borrow funds to at least bolster the economy while we tried to put other industries that could earn in place, and that is how we came to develop the export-manufacturing industry for garments. That is how I came to develop Agro 21 and other things. As I figuratively used to put it, we were sitting on a one-legged stool and wobbling, because we only had one major economic base to earn foreign exchange. We ended the decade with three legs to that stool instead of one. Because we rebuilt tourism, and bauxite and alumina came back, and then, of course, we developed the apparel industry, which was a very substantial earner and a very substantial employer. So we had stabilized the economy.

"That would have taken care of the first two instances in which the country or the economy faced a virtual collapse. The third one was Gilbert. Having done all of this, Gilbert came and virtually wiped it out. But we were able to put back the country into working order within three months. By the end of the year, electricity was once again operating, enabling water to flow and a lot of roads to be fixed, a lot of building construction and repairs were going on. So the country was functioning again by the end of 1988, and from that it went on to have a spectacular two-year run through '89 and '90."

I persevered, asking "But what did it feel like to lose in 1989? You had done a miraculous recovery from the hurricane. I was here. I remember. We were one of the last people to get electricity after months without. Did you have any understanding of why? Or was it the traditional two-party, you'd had two-terms in office and it was time to change?"

Seaga responded: "Having had time to reflect, as I have in doing my autobiography, I recognise that people were greatly offended by the adjustment process that I had to introduce in order to stabilise the economy and the severance of some 27,000 jobs in the public service. That was in '83-'84. This had never happened before. It really was a shock. And I wasn't forgiven for it. The columnists targeted me as being heartless and not looking after poor people, instead looking after people who could introduce investments and had wealth. In truth, I did many projects for poor people, like the HEARTT programme, that were enduring, not projects that failed to survive. Other socioal programmes that  tManley had done survived for awhile and died because they ran out of funds and did not have the  means of self-generation. So it as not true to say that I was not interested in people's welfare, but i was susceptible and vulnerable to the propoganda,

"Quite frankly, PNP voters gave me a lot of support during the 1980 election, because they were fed up with their own party but I recognised eventually, that that support was loaned. It wasn't a realignment of their political preference. It was simply support to get me elected so as to get Manley out."

I queried: "So the moderate PNP vote that brought you into power, once you had restored the country, then they wanted to take their PNP party back and win an election in their own right again? Is that how you feel the 1989 election went?"

"Yes, I was needed, not wanted. I was not able to give the necessary help and attention to sectors like education and health, which had already been run down in the '70s. That was held against me as not having any interest in those sectors. Of course, by that time, we had developed a social well-being plan, which was the most comprehensive development plan for social engineering and we had found the money to do it.

"I said to all the social ministries - education, health, labour, etc. 'Tell me what you need.' They gave me a complete shopping list of needs. Having packaged everything, we found we could finance about two-thirds of it. The rest of the money was found from the international financial institutions. Based on the slogan that 'It takes cash to care,' I thought that people would have realised that I had to put the economy in shape, financially first before we would have the substantial funds needed for social development. But that wasn't so.

"It wasn't so because there was a sort of love affair with Michael Manley and the PNP supporters (who normally outnumber JLP supporters). He had introduced a range of excellent social legislation in the 1970s that was badly needed: getting rid of bastardy; maternity leave, instituting legislation for labour relations, and other similar social improvements that were appealing to the heart. This strengthened Manley's appeal to the poor and helped to attract voters to give him support when the time for election decision arrived."

How different did Seaga think Jamaica would be today if he had won that election in 1989? He responded: "We only needed five years. In that five years we would have carried out much of the social well-being programme to put into place the major projects for full comprehensive development of the social sector. All the major hospitals were to be totally renovated and the education system was to be reorganised. What is known as the ROSE - Reform of Secondary Education, which was to have a single curriculum for all students instead of a different curriculum for different types of schools - was our programme but it came to be implemented by the PNP. If we had had the opportunity to implement all the projects in that programme, it would have been recognised that we really had a programme that took charge of the social needs of people and the reforms that were necessary to bring about a society in which social well-being was well developed.

"More than that, we were at a stage when the economy was surging forward, producing the best growth rates since the late 1960s. This would have continued. We would not have run into the problem where at the beginning of the 1990s the mishandling of the economy was reviving old fears of a return to the drying up of foreign exchange as in the 1970s. Those fears caused the exchange rate to depreciate from J$5.50 to J$14 to US$1 in two and a half years. Manley panicked. He removed exchange-control regulations, allowing foreign exchange to move freely in and out of the country. I told him he was wrong because more would be lost than gained. This is exactly what happened. The Bank of Jamaica had no foreign exchange to defend the rapidly deteriorating rate of exchange and, as a result, it zoomed out of control, leading to the meltdown of the financial system in the mid-1990s. The government of the 1990s were just not capable of running a market-driven economy. If we'd had the chance to continue running the economy, in five years the gains would have put it on an irreversible path of growth that, I believe, would have been maintained, no matter who or what followed."