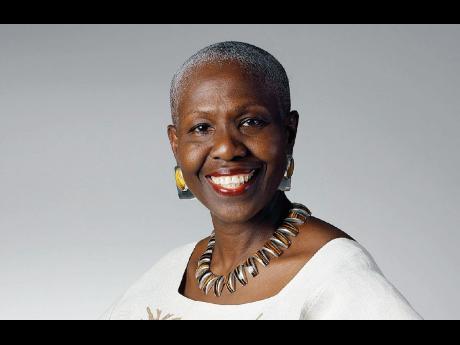 "A woman who aspires to be equal to a man is an under-achiever." That famous feminist witticism came to mind as I closely examined the Gleaner's Top of the Class magazine published on February 23. Claiming to present "a selection of Jamaica's outstanding academic achievers," the editors of the magazine failed to put even one girl on the cover.

Instead, there was an exuberant display of testosterone power. Fourteen young men from Munro College were chosen to illustrate academic achievement. Decked out in their formal uniform - most of them with jacket and tie - they were dressed for success: 'to di worl,' as one of the young men enthusiastically gestured.

These front-running male achievers are being positioned to take their 'natural' place as leaders of industry, chairmen of boards, heads of tertiary institutions, top politicians, senior cops, unextraditable dons: the full hundred.

If I were a young female academic achiever, I would 'feel a way'. I would wonder why I was erased from the cover. Out of the picture. But, perhaps, these days, young women are learning to put young men in front for a peaceful life. With all the talk of the 'marginalisation' of men, young women may find it easier simply to pretend to take second place rather than make a big fuss about being left out.

These cunning women were guided by proverbial wisdom: 'Kip yu cunny a yu belly.' Conceal your strength. The Dictionary of Jamaican English tells us that 'cunny' is both an adjective and a noun. In this proverb, 'cunny' means 'cunning, craftiness; a trick, tricks.' The dictionary uses an insightful proverb to illustrate the meaning of the word: 'Cunny (cunning) better dan 'trong (strength).'

My generation of feminists hasn't quite learned how to 'kip wi cunny a wi belly.' So I'm bawling out on behalf of today's young women who are now being silenced. Why should bright young women in the 21st century still have to settle for subterfuge? Why should our high-achieving young women have to retreat to the margins in order for our young men to feel powerful? Is there really strength in cunning? Or is it a sign of weakness to play the game of female under-achievement?

As it turns out, the story inside the Top of the Class magazine is quite different from the cover version. This is a recurring problem with media images. They often shape perception in deceitful ways. If a picture is, in fact, more eloquent than a thousand words, then the impression you get from the cover of The Gleaner magazine is that the majority of the outstanding achievers is male.

This is far from the truth. I counted all the pictures of the outstanding achievers. In cases where I couldn't decide if a student was male or female, I gave the benefit of the doubt to the male. These days, names are not always helpful indicators of gender. By my calculation, there are 174 male and 294 female achievers. But the same 14 Munro cover boys are also featured in the pin-up centrefold. And there they appear twice: first in individual headshots and then in a large group picture. So each Munro achiever appears three times in the magazine. Talk about overcompensation.

If you eliminate the second and third appearances of the Munro achievers you are down to 146 males. So the ratio of male to female top-class students becomes even starker: 146 males to 293 females. For every one male achiever there are two female. Yet there's not one single female on the cover of the magazine! Why would the editors of the Top of the Class magazine choose to cover up the facts and project a fraudulent image of exclusive male superiority? Why is female achievement undervalued and underrepresented?

Is it because the women's movement in Jamaica is dead? Are all of the old-school feminists now keeping their 'cunny' in their belly? Surely, not! Last week, we celebrated International Women's Day with much fanfare. The theme was 'Equal Rights, Equal Opportunities: Progress for All'. The Inter-American Year of Women was officially launched and female trailblazers were lauded by the Bureau of Women's Affairs.

If the women's movement is alive and well, what lessons are we teaching young women and men about equal rights and opportunities? That women should 'aspire' to be equal to men even when girls consistently outperform boys academically? That it doesn't really matter if there are no young women on the cover of Top of the Class? That young men need affirmative action in order to achieve?

Are we teaching young people that media images are far more powerful than grand 'equal opportunity' slogans? And, if so, what role should the media play in achieving the goal of 'progress for all'? Are media houses impregnable bastions of male privilege? What difference can female journalists make in transforming the culture of apparent entitlement? These are the hard questions we must ask if we are really serious about gender justice.

On a completely different note, I see that an English professor at the University of Maryland thinks I gave a 'tabloid' review of Edward Seaga's autobiography in last week's column. She missed the point: I didn't do a review at all. The enigmatic heartthrob photo that adorns the book made me wonder if I could find any evidence to counter the claim made in this mischievous joke: what's the difference between Michael Manley and Edward Seaga? Manley is Don Juan and Seaga is the One Don. But, alas, Seaga's lips are sealed.

Editor's note: The Gleaner's Top Of The Class publicaton in 2009 featured St Andrew High School for Girls on its front cover. Each year, a different school takes that postion.