Roy Hamilton - fanning the fire of the African dance 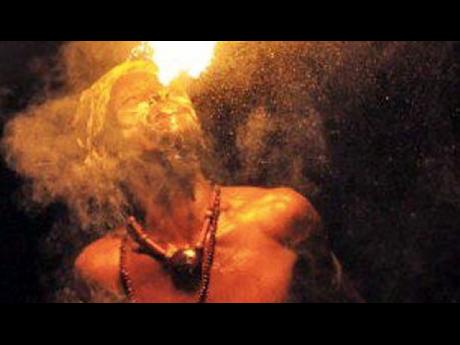 Picture Africa. Think about pulsating drumming - the pace slow, staccato, fast. Visualise scantily clad natives dancing frantically. And then there is Roy Hamilton, 'The Jungle King' - African fire-dancer, this week's keeper of the heritage. Dancing is in his blood. Hamilton said he has been dancing before he was born, being the son of noted Kumina dancer 'Mama Bogle', who he claimed is a descendant of National Hero Paul Bogle.

His father, too, is no stranger to traditional dancing. He was born in Kingston, but was brought up in St Ann by his father who is originally from St Thomas. There, the family tradition continued at dance classes in primary school.

Though his feet were always moving, this 47-year-old graduate of Ocho Rios Secondary School had begun his professional life in catering. He later played tennis on the north coast circuit. His career in dancing started with El Tropicano performing group, led by Nico Blanco, champion limbo dancer, followed by membership in Roseta All-Star Dance Company of Ocho Rios.

For three and a half years, Hamilton was with the Corporate Area's Movements Dance Company, where he honed his technical and performance skills. Simultaneously, he was the artistic director of his own Ocho Rios group, Roots Dance Troupe. He still lives in St Ann, but spends most of his time in Negril where he fire-dances on the beachfronts, at privates parties and hotels, and gives lessons.

Trained and experienced in all aspects of modern dance, Hamilton has participated in national and international competitions, taking top prizes for folk and Latin dance in Cuba in 1988. This teacher, musical arranger, performer and choreographer has designed educational programmes for young people. Many of his protégés have won gold medals at the regional and national levels of the Jamaica Cultural Development Commission's Festival of Arts competitions.

Despite his knowledge of many genres, including jazz, it is fire-dancing that keeps him connected to his African roots. He said his "contemporary choreography and performances are inspired by the ancestral movements and rhythms of the Congo and central Africa". When he fire-dances, he is at once in the villages and bushes of Africa, moving to the beats of native drums.

His foray into fire-dancing started over 20 years ago when he was with Roseta. He was influenced by the artistry of a group member called Rico, a prolific fire-dancer. But while Rico was an inspiration, Hamilton wanted to put his own twists to the movements and spent time rehearsing them.

"When he finish a fire-dance I always take his fire sticks from him, and when I go in the sand, I design my own thing, saying this is what I would do if I am doing fire-dance," he said. Now, the self-proclaimed rebel and 'lion' would like to visit Africa to participate in fire-dances.

Spewing fire and dancing with flaming sticks is not only a source of income, it's a way of embracing this scorching element. Fire-dancing to him is about purity, a way of extinguishing all forms of corruption. And he doesn't worry about the possibility of getting burnt by his own fire. He is very much aware of what he is dealing with, and with a clear head and clean heart, he has no fear.

Hamilton is the father of three and grandfather of five, and his offspring are not left out of the mix. He's teaching them their culture and they are being prepared to carry on the heritage. One daughter was a member of his dance troupe.

"What I didn't cover they will cover. I break them in from early," he said. With his fire-dance, Roy Hamilton is not only appreciating the purifying properties of fire, he's also preserving an aspect of our traditional heritage in dance.