Death Before Dishonour closes with 'The Final Warr' 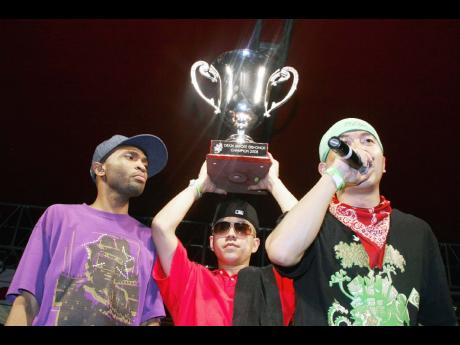 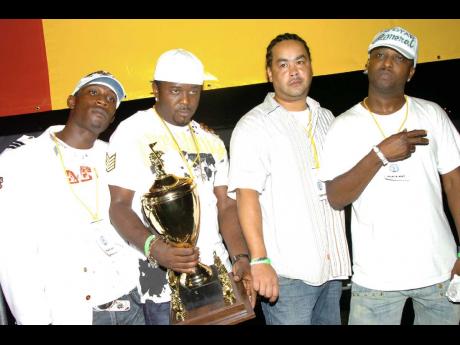 Members of the Black Kat sound system, based in Christiana, Manchester, pose with their trophy after emerging winners of the Death Before Dishonour World Clash Jamaica, at the ninth staging of the event held at Pier One in Montego Bay on Monday, April 13, 2009. From left: Horace 'Speng' Gray, Rodney 'Unzie' Johnson, Steven 'Stevie' Chang and Edward 'Pink Panther' Johnson. - File photo
1
2

Every Easter Monday since 2001, a day after the Christian community celebrates the resurrection of Jesus Christ, sound system clash fans have gathered to witness musical slaughter at the Death Before Dishonour event in western Jamaica. This Easter Monday though, the hordes will howl for a 'sound bway' head and give their kudos - or curses - to the eventual champion for the final time - at least in the current Death Before Dishonour format. The name for the Monday, April 5, event says it all - The Final Warr.

Irish and Chin, promoters of the World Clash series, are calling an end to an era in sound clashing history. Ace sounds Mighty Crown, Black Kat, Bass Odyssey, Tony Matterhorn, Sentinel and World Clash newcomer Bredda Hype will battle it out to see who will take the final title.

The Death Before Dishonour atmosphere is incredible, crackling with the energy of a crowd which understands the sound system clash culture and selectors who largely know each other's capabilities. The clash starts officially at midnight with a draw to determine the playing order of four of the five competing sound systems. The defending champions automatically have the privilege of playing last - and the advantage of being able to respond to the other competitors' songs. The crowd is the sole judge through the rounds of clashing, deciding who drops out and the eventual victor by show of hands. Nobody drops out in round one and then one sound system is eliminated in each following round until two remain, the final pair alternating exchanges of 10 dubplates each with the first to score six dubplate victories crowned champion.

The whole process, fraught with tension, verbal and musical broadsides, moments of protest - as inevitably a hand count will be disputed, and jeers as a sound system flounders - ends at about daylight. It is a no-holds barred affair with curses flying thick and fast, although the selectors take pains to explain that they are firm friends.

Among the climactic Death Before Dishonour moments have been Bass Odyssey's Squingy, who died in December, falling from the stage rigging at the 2007 staging. Dressed in full West Indies cricketer's gear, he clambered high into the sky and took a tumble, narrowly missing a large metal pin and lying on the ground with a broken leg for some minutes. The Japanese sound system Mighty Crown claimed their first title that year. They were very emotional about the victory, as had been Ricky Trooper the previous year. The former Kilamanjaro selector shed a tear as he won with his Sound Trooper outfit.

In earlier years, there had been Matterhorn casually leaning against a metal support for a tent, explaining to all how he was taking it easy and giving away a round or two as he was going to win anyway - which he did. Black Kat and Bass Odyssey have taken their long-established rivalry, played out clashes all over central and western Jamaica, into Death Before Dishonour, their loyal fans always making a great night of it.

And there have been spectacular rounds, Matterhorn and Mighty Crown known for their dubplates with international artistes and dropping them to great effect. One of the most renowned rounds of all was David Rodigan's 2006 set which took him into the finals, where he turned a Kangol hat around on his head and turned the course of the clash around as well, dropping Tenor Saw on dub and standout Britisher skanks onstage.

Garfield 'Chin' Bourne of Irish and Chin said, "The first Death Before Dishonour was in Trelawny with Mighty Crown, Bass Odyssey, David Rodigan and Tony Matterhorn. It was a sold-out event. The venue was too small so we decided to move to the closest city, which was Montego Bay. We've been at Pier One since 2002."

One of the high points throughout the 10 years was in 2004 when the event was sponsored by Puma and dubbed 'The Road to Athens' and the winner (Black Kat) accompanied the Jamaican Olympic team to Athens, Greece.

"It was a huge transition. From the beginning it was a very traditional sound clash set up by the speaker box and then we took it to the stage, brought in the lights, camera and the action, and it's been that way ever since - no artistes just the selectors," Chin said. During the peak period from 2004 to 2006, the show attracted up to 8,000 patrons to a single staging.

For Chin, his two most memorable moments were in 2007 when Bass Odyssey's Squingy took to climbing the stage rigging, walking on top of the mounting for the lighting system and had the crowd in an uproar while he 'toasted' from the skies. Another moment was in 2008 when they did the tribute to the greats: King Jammys, Black Scorpio, Downbeat and David Rodigan. Chin said: "We had the young selectors passing on the award to the elders, giving them their accolades, and it was really sentimental."

For The Final Warr, Chin said fans can expect big surprises and an exciting end as they close this chapter and prepare for a new one.

"It will be grand, memorable, all champions onstage competing not for the World Clash trophy but for the Squingy Cup in honour of Squingy from Bass Odyssey," said Chin. "We're very excited about it. We want to make it clear we're not giving up the Easter Monday festivities, we're not walking away. We have a whole year to find a new direction and create a new era."

Garfield 'Chin' Bourne said there are a number of reasons for calling it a day. "It's time for the sound systems to go through changes for the years to come. The standard World Clash stage has been set too high for the new generation of selectors and those coming in. I feel the industry needs to go through a change with fresh ideas, new format, new attractions, new selectors," he said.

Among the sound systems that have been introduced into the big league at Death Before Dishonour are One Love, Black Blunt, Silver Star and Freddie Krueger (former Kilamanjaro selector). This year, for The Final Warr, the fresh bloods are Sentinel and Guinness Sounds of Greatness champion Bredda Hype.

Chin said five years into the Death Before Dishonour series, he realised how hard it was for new talent to compete against the stars of the clash world, citing Japanese sound Mighty Crown as the only newcomer to break through. At the top of the game for Chin are World Clash champions Black Kat, Bass Odyssey, Tony Matterhorn, David Rodigan and Mighty Crown. However, Chin said the new generation of patrons is more likely to follow new selectors rather than the established acts who are not that relevant to them.

He said an important element is the cost to new selectors of arming themselves for battle. Dubplates, specialised records made for a particular sound and often a specific occasion, are an essential and determining factor in clashes. Chin said they can be credited with the deterioration of the musical sport. According to him, the cost of the average dubplate for one song from one artiste ranges from US$700-1,000.

"To come into a World Clash ready can run you like US$25,000-$35,000 to compete ... the young guys don't have this money to buy top dubplates. As long as you have a Mighty Crown and a Black Kat with those dubs it will never be a level playing field, so we have to recreate the arena," he said.

It is not only the cost of the dub plates which is prohibitive for new entrants, but also the value of vintage, which is impossible to recreate. With older dub plates, especially by dead artistes or those who rarely do dubs highly prized by sound systems and valued by the crowd, the newer sounds do not have a prayer when the clash goes into 'foundation' mode, as inevitably happens going into the closing stages.