Renewal and Continuity: The National Dance Theatre Company in NY 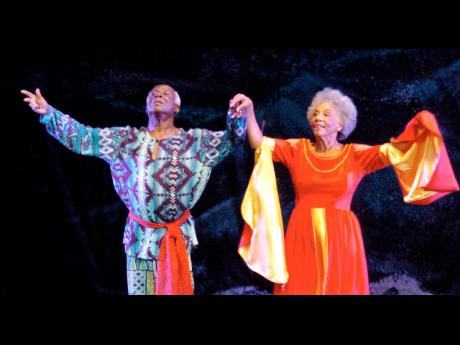 Professor Rex Nettleford's dance theatre company did Jamaica proud over the extended weekend of March 5, 6 and 7. Before anyone takes me to task because I refer to "Professor Nettleford's company" rather than the National Dance Theatre Company of Jamaica (NDTC), let me assure you that I am very aware that 'Prof' hated to hear the company thus labelled. Nevertheless, at the Brooklyn Center for the Performing Arts (BCPA) at Brooklyn College, just for that weekend, it was indeed Professor Nettleford's company.

After one of the performances I heard a young lady discussing with her friends how many hours, if any, the professor could have slept. I assured them that many older and wiser heads than theirs had put their minds to that particular calculation without success. The young audience was enraptured by the dancers, the singers and the music, and I saw at least one group which had arrived late for the first performance wait in the foyer and file in again for the second performance.

The NDTC is the only act that fills the 2,400 seats at the BCPA for two consecutive evenings of performance, and last Saturday and Sunday were no exception. The centre's managing director Frank Sonntag spoke at the start of the performances about the NDTC's relationship with the BCPA; he spoke too of Professor Nettleford and his achievements, remarking that words such as icon and visionary seem inadequate to describe him. The audience hung on every word, interspersing the remarks with applause again and again. At a post-performance reception on Saturday, Congresswoman Yvette Clarke, whose parents are Jamaican, spoke in similar vein.

The audiences for the two major performances were, of course, largely Caribbean, and many had travelled from outside New York to attend. There were also many people who had no apparent Caribbean links. I spoke to one obviously well-to-do Jewish woman whose vintage is perhaps best illustrated by the fact that she purchased her first New York Philharmonic season ticket for the princely sum of $10, which she had to borrow and repay monthly! I was surprised when she expressed regret that she had never met Rex Nettleford and I was equally surprised when she also said that she was being joined by a group of friends who never missed the NDTC in New York.

I glimpsed her later with a group, presumably the friends, and they all appeared to be roughly her age, equally well-to-do, and definitely non-Caribbean.

The performance of dancers, singers and musicians was simply tremendous and one could not but be proud of these inheritors of the grail as they electrified the audiences, spontaneous applause breaking out at several points before the end of items. Both weekend performances closed with Kumina with Marlon Simms in the role of the King (instead of Nettleford). As the drums and voices filled the theatre and the curtain rose to reveal the familiar moonlit scene, the expectation was palpable. Waves of applause and an almost audible sigh of relief went up as Simms demonstrated that the role in all its vitality lives on. At the curtain call, a large lit photo of Professor Nettleford was lowered as a backdrop. The audiences leapt to their feet and the applause was thunderous.

After each performance, there is a traditional backstage meeting usually conducted by 'Prof'; at the meetings on this tour, tears flowed freely as his loss cut keenly into us; and the tears flowed not only from company members, but from Brooklyn Center staff as well. After the meetings there were the interviews with writers and commentators of the Caribbean media, all wanting to know about the NDTC's future path.

On Monday, as we filed on to the plane to return to Jamaica, a passenger who was already seated demanded to know who had taken over the role of the Kumina King. When we indicated that Simms now danced that role, she said that she regretted not having been able to attend the New York performances, but warned Simms that she would be watching with a critical eye whenever Kumina is next performed in Jamaica.

The BCPA and countless members of the audience sought to extract promises that the NDTC would continue its relationship with New York, a relationship which now spans a quarter century. What they were seeking, though, was more than that; they were seeking assurances that the standards of excellence which the company represents will be maintained. For those members of the NDTC who were touring for the first time, there was a dawning - an understanding that the responsibility is not just to perform at our best, but a responsibility as well to the Jamaicans who live outside of the island to continue to present our culture as unique and valid, a culture of which the Diaspora can be justly proud.

Professor, we know you are beaming happily at the New York performances, and even though pride is not encouraged where you now are, we are sure that you will be given some leeway. The NDTC will continue because of the training, the discipline, the understanding of our role as ambassadors for Jamaica which you instilled in us, and which enabled us to perform as we did, even while we grieved. So, just this once, and we promise, never again, allow us to say in homage that the dance theatre company that filled and electrified the BCPA was, without question, your company.

Jeffrey Cobham is the chairman of the NDTC.