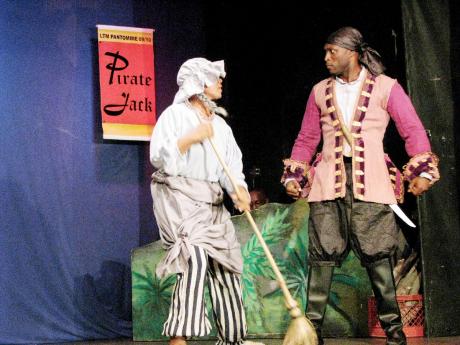 Mother-in-law troubles plague Pirate Jack (Audley Green), who has to deal with more than he has bargained for with Maddan Law (Faith Bucknor) in the LTM National Pantomime 'Pirate Jack'. - Contributed photo

The show began its run on December 26 and has since been nominated in six categories at the Actor Boy Awards. Groups representing schools from across the island, community and church organisations have already made their annual trip to the pantomime, with others booked to come.

The title role of Pirate Jack is played by Audley Green, his wife by Doreen King, his 'maddan-law' by Faith Bucknor and daughter Coral by Toni-Ann Fraser.

The Michael Lorde-set, which reflects a seaside environment, has come in for much acclaim, as well as the lighting by Michael McDonald. A combination of the various talents contributed to the special effects which has also been nominated in the Actor Boy Awards. The pantomime has always been strong on music and this season the song, The Life of a Fish, with lyrics by Barbara Gloudon and music by Grub Cooper, has also been nominated for original score. The song is performed by the Pantomime Orchestra led by Calvin 'Bubbles' Cameron.

Pirate Jack continues its run at the Little Theatre Wednesdays to Sundays.