Smash those walls now - Garrisons must be dismantled 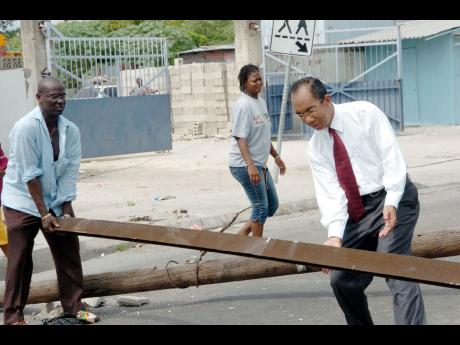 Mr Prime Minister, tear down those walls and set yourself and the other captives free! You have promised to dismantle the garrisons and there is no better time than now.

From The Gleaner of June 1, 2005: "Opposition leader Bruce Golding on Tuesday, May 17, appealed for the implementation of crime recommendations to dismantle garrisons and reshape politics in these communities.

"Mr Golding, who in 1995 denounced garrison politics while establishing the National Democratic Movement (NDM), said the country is being faced with a 'huge implementation deficit'.

"Speaking ahead of the bi-partisan crime summit at Jamaica House ... the West Kingston member of Parliament cited the recommendations of several crime committees since 1970 ... ."

His [Bruce Golding's] crusade for political reform - "In the early 1990s, after considerable reflection and analysis, Golding felt the need for reform of Jamaica's political system. He was concerned that the history of political tribalism had polarised the society and had prevented the people from uniting behind common goals. He embarked on a crusade, both within the JLP and publicly, for fundamental constitutional changes and major reform of our political culture and practices. Public response was overwhelmingly positive but much less so within the JLP, some of whose senior members were reluctant to embrace his ideas for change.

"He then announced his intention to form a new political party that would be "new and different, inclusive not exclusionary", committed to fundamental reform of our constitutional arrangements and political system. This gave birth to the National Democratic Movement and Golding was elected its first president.

"Although there was strong support for the ideas espoused by the NDM, it lacked the organisational strength to translate this into electoral support. In 2001, the NDM again fared badly in a by-election in North East St Ann. Shortly after, Golding announced his resignation as president of the NDM.

His return to the JLP