The Haitian disaster: A theological perspective 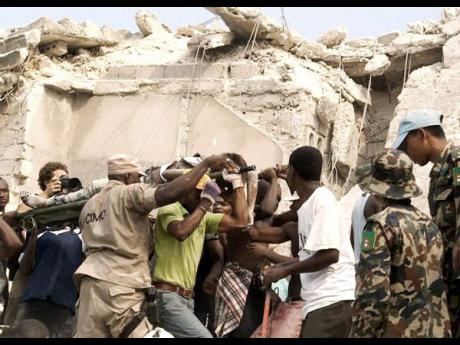 People carry an injured person after the earthquake in Port-au-Prince, Haiti, on Tuesday, January 12. - AP

The following article was submitted by the Public Theology Forum, an ecumenical group of ministers and theologians.

To date, approximately 200,000 Haitians have died, millions have been injured and left homeless after the devastating earthquake of January 12. Haiti is one of the world's poorest nations with 80 per cent of the population living on less than US$2 a day. The nation's infrastructure was already severely compromised before the earthquake struck.

Now, even the little that remained has been taken away. Lament and compassion are the dominant responses from most people around the world. Our tears are soaked in the pain of our Haitian sisters and brothers. Now that media attention on Haiti has somewhat subsided, it is possible to engage in a theological reflection on the disaster. We have observed an outpouring of solidarity with the people of Haiti in general, and more particularly, residents of those locations that have been subjected to the severe ravages of earthquake.

As the world has contemplated this tragedy of unprecedented proportions, many explanations for its occurrence have been put forward. Perhaps the most publicised of these has attributed it to divine retaliation against the sinfulness of the Haitian people. According to an article published in The Gleaner on Monday, January 18, some persons say it is a sign that Haitians must deepen their faith (in God), while others see it as God's judgement on corruption said to be rampant among some sections of that community and their involvement in voodoo. The American evangelist, Pat Robertson, made the controversial, if not outrageous claim, that this tragedy has occurred because Haiti has been cursed as a result of a pact its founding leaders made with the devil two centuries ago to overthrow their French rulers and become the world's first black republic.

Since that time, according to Robertson, the island has had to endure this and other hardships because of God's vengeance against its deal with the devil. Mr Robertson is quoted as saying, "They said, 'We will serve you if you get us free from the prince.' And so the devil said, 'OK, it's a deal.' They kicked the French out, the Haitians revolted and got themselves free."

These claims are fraught with a number of difficulties because, not only do they put forward a view of vengeance being a dominant character trait of God, but they also would imply that those nations that do not experience similar occurrences are either less sinful than the Haitians or are not sinful at all. The experience of the Haitian people is by no means unique to them. Throughout history, countless people in various lands have been the victims of horrible natural disasters. Additionally, Robertson's claims raise the issue concerning what God does, as against that which God allows to happen; and may even lead one to ask, is the devil's power equal to or greater than God's?

Disasters and tragedies come to all

At the start of the last decade, we witnessed the crash of the Twin Towers through terrorist attack in 2001; we witnessed the devastating Asian tsunami in December 2004 that killed tens of thousands; Katrina hurricane overwhelmed New Orleans; and let's not forget our own Hurricane Ivan. Now, at the beginning of a new decade, earthquake has struck Haiti. Disasters and tragedies come to all. They have always been part of life on Earth. No nation and people have escaped! Responding to a question concerning the Asian tsunami, about why a God "so involved in our daily life" would allow a tsunami to kill hundreds of thousands of people, Robertson replied: "I don't think He (meaning God) reverses the laws of nature." What then is the difference between the tragedy of the Asian tsunami and the Haitian catastrophe?

When earthquakes and hurricanes unleash their power that leads to death and destruction, we encounter some of the deep-seated religious prejudices that exist among our people. In their quest for easy answers they fall for popular cultural and political prejudices that assume that when disasters and tragedies strike, they are vengeful actions of God.

They fail to consider that in addition to natural causes, there are historical factors, or acts of human beings, that have served to make worse, an already bad situation. In this regard, we may point to examples such as the less-than-ideal building practices and standards that cause their physical structures to crumble at the slightest tremor; or the deforestation of the environment that causes land slippages and breaks at the slightest shake. And then, there are those not-to-be-forgotten actions by others against Haiti for daring to become 'the world's first independent Black Republic'.

All these have contributed immeasurably to the impoverishment of Haiti resulting in the exposure and consequent impact that we have witnessed - acts of human beings, not necessarily acts of God.

The Christian faith teaches that God, who is absolutely and completely good, is absolutely and completely opposed to evil in all its varied expressions - that God does not have a double standard of morality; that God demands that amends be made where evil has been committed for this is what justice requires; and God is a just God. But the faith we embrace also declares that God took care of those demands through the sacrificial death of Jesus.

Ours is a faith that does not offer the guarantee of immunity from exposure to life's threatening, troubling experiences and circumstances. What it offers is the assurance that, in Christ, we do not and will not face those circumstances alone.

The writer of Luke's Gospel, in chapter 13, narrates part of Jesus' contribution to a conversation he had with some of those who seemed to have come to Him to share news of, and/or hear His views on some tragedy of which they had heard or known. The Haitian tragedy, may or not be an act of God. It is God who decides on that, not us! There is no doubt that the people of Haiti need to repent, but so do the rest of us. What is more obvious is that the disaster is directly linked to economic environmental degradation, substandard building practices and the outcome of the wilful actions of human beings, both Haitians and non-Haitians.

Our duty is not to determine the cause, but to respond to the challenge it brings. We are not authorised by God to presume or to invoke God's judgement on someone else.

Disaster comes to the Just and the Unjust!

We must learn the lesson that Lovindeer taught the nation after our experience with Hurricane Gilbert in 1988: When breeze lick dung Mr Chin restaurant, Natty Dread jump up and chant, Lick dem Jah! gwaan go dweet; A dem did gi di Dread pork fi eat, Jook dem Jah with storm and thunder. Tear off dem roof and bruk dem window.

As long as the hurricane was hurting others, God was on his side. However, when the hurricane turned towards his house, his language changed to pleading for God's mercy: Likkle after that Gilbert turn back, Lift off di roof off a Natty Dread shack, Him seh blouse and skirt Jah must a never know, Seh I&I live right ya so. The lesson that Natty Dread failed to learn was that disaster comes to the just and to the unjust!

The most urgent task facing the religious people is not that which calls us to be verifiers of the outpouring of God's righteous indignation. After all, those who believe in a vengeful God and know themselves to be guilty of acts deserving of God's vengeance know exactly what hour of the day it is. In this crisis we are called to be bearers of God's overflowing compassion.