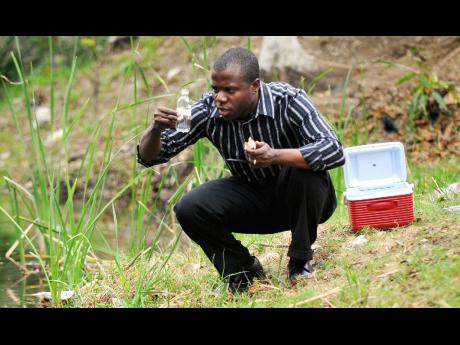 A Sunday Gleaner investigation has revealed that three of the untreated water sources being frequented by the water trucks failed a standard bacteria test known in environmental health circles as multiple-tube fermentation.

The results revealed that scores of residents have been drinking dirty water that looks clean.

In the meantime, public health officials are warning that the country is dangerously perched on the edge of an outbreak of water-borne diseases if the relevant authorities do not find a way to lock off the dirty practice.

AS THE drastic drought conditions continue to grip the island and the need for potable water mounts, unscrupulous persons are selling bacteria-infested water drawn from untreated sources to unsuspecting residents.

A Sunday Gleaner investigation has revealed that three of the untreated water sources being frequented by the water trucks failed a standard bacteria test known in environmental health circles as multiple-tube fermentation.

Our news team collected samples from three locations - the Ferry Fresh Water River on Mandela Highway; a stream that runs through Camp Verley in Spring Gardens, St Catherine, and a makeshift pipe that siphons water from a main that is also in Spring Gardens. These samples were taken to the National Public Health Laboratory for testing.

The results revealed that scores of residents have been drinking dirty water that looks clean.

The Ministry of Health standard for potable water, which is in keeping with the international benchmark, requires that faecal and total coliform counts be at zero. In other words, the bacteria groups should be absent from the source if the water is to be passed potable.

"The water (from the samples) is not safe for drinking because all the samples failed the public-health standards," said an expert who could not be named.

In the meantime, public-health officials are warning that the country is dangerously perched on the edge of an outbreak of water-borne diseases if the relevant authorities do not find a way to lock off the dirty practice.

A copy of a public-health document gleaned by The Sunday Gleaner confirmed that some water trucks are "harnessing drinking water from untreated and unlicensed sources".

It continued: "They are now seeking cheaper sources and/or somewhere that they can load quickly so they can respond to numerous orders. This is resulting in some of them travelling to rivers, springs and unlicensed supplies to load their trucks."

The report labelled the practice of drawing water from untreated sources as dangerous "because the people who are being supplied are of the opinion that the water is suitable for drinking".

A Sunday Gleaner investigation has revealed that trucks have been filling up with untreated water from the Ferry Fresh Water River along the Mandela Highway, and from a spring along the roadside in Spring Gardens, St Catherine.

"This situation has grave implications for public health as poor sanitation due to drought conditions, plus the consumption of untreated water, may lead to an outbreak of several water-borne diseases," the report warned.

Official statistics from the Ministry of Health show that there have been significant increases in the cases of water-borne diseases during this protracted period of drought.

The data revealed that gastro-enteritis cases have leapt by almost 80 per cent to more than 12,000 cases in the first two months of this year when compared to the corresponding period last year.

Local health experts are theorising that there might be a link between the increased cases of gastro-enteritis and the bacteria-riddled water being sold to households.

Dr Sheila Campbell-Forrester, chief medical officer (CMO) in the health ministry, says the link is not far-fetched. "There can be. We all know that untreated water can transport germs. So, if it does that and we ingest it, the chances of getting gastro-enteritis increases, and we know that it tends to be worse in children," Campbell-Forrester explained.

The CMO, who said the ministry had received reports from the parishes about the practice of harnessing contaminated water and selling it to unsuspecting householders, pointed out that the ministry had ratcheted up its surveillance systems as public-health inspectors are monitoring the potentially explosive situation.

Campbell-Forrester warned the individuals seeking to cash in on the drought that they can be prosecuted for willingly distributing polluted water. She also said that "under the law, we can get you to dump the water".